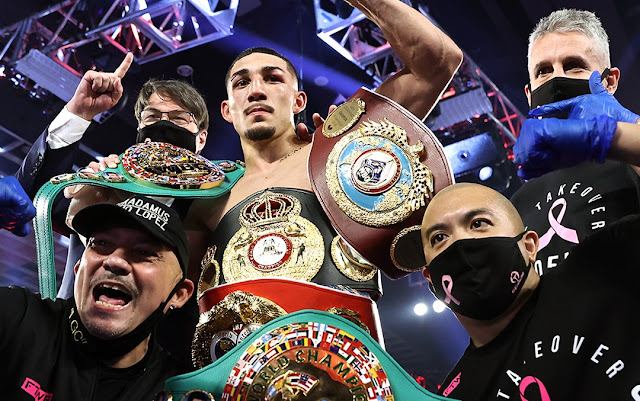 Teofimo Lopez shocked both the boxing world and Vasily Lomachenko in their lightweight unification fight on Saturday night at the MGM Grand Conference Center.

Lopez, who entered the fight as an underdog was able to play his cards right, building up an early lead, then fend off Lomachenko’s second half comeback to win a unanimous decision to retained his IBF belt and won the WBA “super”, WBC “franchise” and WBO titles.
The fight was scored by Tim Cheatham (116-112), Julie Lederman (119-109) and Steve Weisfeld (117-111) , all for Lopez (16-0, 12 KOs) . Though the scores were a bit wider than expected but no one is taking anything from Lopez, who against a 4-1 favourite and one considered and one of the pound for pound fighters in the sport, came out victorious and became the first undisputed champion of the four belt era.
Lomachenko (14-2, 10 KOs) lost for the second time in his professional career and saw his 13 fight winning streak snapped, one which dates back to 2014, when he lost a Split Decision to Mexico’s Orlando Salido in their featherweight title fight.
Subscribe To Live Updates
On Your Favorites Sports

Lopez was so strong and aggressive in the opening six rounds and to aid his campaign, Lomachenko didn’t throw much, allowing Lopez to build a comfortable lead. However, Lomachenko came back strong in the second half, landing many flush punches and forcing Lopez to fight defensively and on the back-foot.
Lopez was never visibly hurt by Lomachenko in the fight and according to CompuBox stats, he connected 42 more punches, mostly Power Punches than Lomachenko, who connected more jabs in the action packed 12 round battle.
Before the fight, Lomachenko spent 13½ months away from the ring and his last action was against England’s Luke Campbell (20-3, 16 KOs), whom he out-pointed to win the vacant WBC lightweight title at the O2 Arena on August 19th, 2019.
Lopez on the other hand, has only been 10 months out of action, mostly caused by the lack of action during the pandemic, his last fight was a 2nd round knockout victory over former IBF lightweight champion Richard Commey.
Loma and Lopez were supposed to fight at the Madison Square Garden on May 30th but that got postponed due to the COVID 19 Pandemic, which forced the world to a stand still.
Don’t Fo

[…] Teofimo Lopez Jr had an admirable 2020, out-pointing the formerly unbeaten Vasily Lomachenko to unif… division but things soon went south fir the Dominican Republican as a Legal case with Top Rank followed and the frequent postponement of his upcoming defense against George Kambasos Jr, triggered his low levels. […]