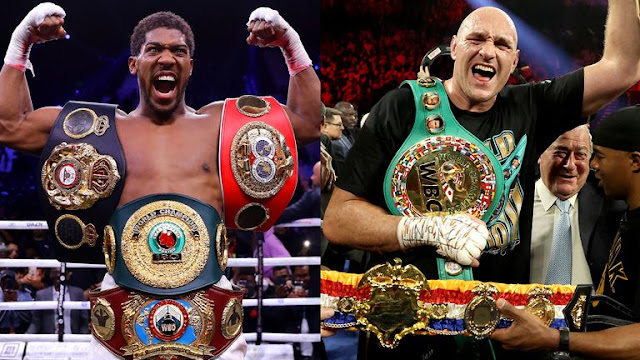 Former Cruiserweight champion Tony Bellew spent some time giving his view on the potential mega fight between Unified Heavyweight Champion Anthony Joshua and WBC Heavyweight Champion Tyson Fury, which is set to take place in 2021, after both are able to take care of their primary responsibility of mandatory and rematch later this year.

Bellew sees Joshua defeating Fury, when the two Brits meet in a high stakes unification. However Fury will first have to take care of his trilogy with former WBC Heavyweight Champion Deontay Wilder later this year and Joshua also have to deal with his IBF mandatory Kubrat Pulev, before dreams of a unification.
Both will be in line to meet in 2021, if they both come out victorious in their respective fights. For that Bellew see’s just one winner emerging but feels Joshua will encounter much more problems from Whyte than Fury, if they are to ever meet in a rematch.
UPDATES ON YOUR FAVOURITE SPORTS

Anthony Joshua knocked Dillian Whyte out in the seventh round of their meeting back in 2015 but Bellew feels Whyte is more emotional and will take the fight personal in a rematch, which along the way leaves Joshua getting clipped with a big right and knocked out.

“I believe the only heavyweight in the world with the skillset, the speed and the accuracy who can [beat Fury] is AJ. On the other hand, when it comes to matching other fighters up – I may think AJ beats Fury, but I think AJ has real problems going in with Dillian Whyte in a rematch because styles make fights. Dillian will put pressure on AJ and he’ll probably trade. Because it’s so fierce between them with the rivalry and the domestic stuff, he’d probably get caught up in a war and that’d be wrong,” Bellew told Talk Sport.

“If AJ went in and boxed against someone like Dillian Whyte, he gives himself a much better opportunity. But when emotions take part, things get out of hand, you get caught up in the moment and you start trading. I think for AJ going in against Fury, he doesn’t get involved with any of that. He just literally jumps on him and throws and lets the punches go.

However beating Tyson Fury in Bellew prediction depends on when the fighter plans on attacking the Gypsy King. Because nobody beats Fury after the first six rounds.

“AJ’s the fastest combination puncher in the heavyweight division since Mike Tyson. No-one throws punches in combinations with the speed, power and ferocity that AJ does. As I said, he’s got six rounds to do it against Fury. If them six rounds go past then I don’t see anybody beating Tyson Fury after six rounds.”