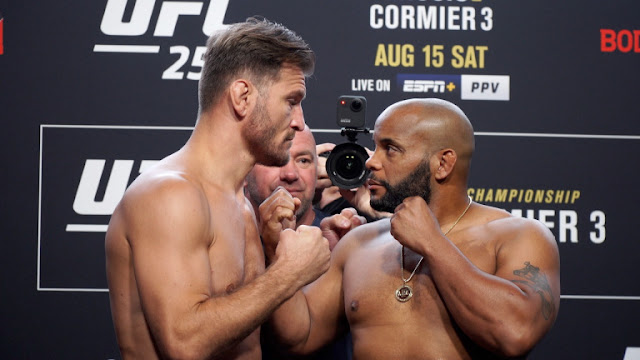 UFC Heavyweight Champion Stipe Miocic and Daniel Cormier will be running it again at UFC 252. A trilogy fight that is more about legacy and Dopeclics will serve you all the Results, Highlights, Images, Videos as it happens, right from the UFC Apex In Las Vegas.

Cormier will be hoping to end his career on a high note, when he takes on Miocic who in their last outing carried out a perfect revenge, knocking him out in the Fourth round of their rematch at UFC 241. This Fight is to decide who is the best among the two as Cormier won their first meeting with a first round Knockout.

Bantamweight Knockout artist Sean O’Malley puts his unblemished 12-0 record against Marlon Vera in the Co-Main Event, having confidence, the height of Burj Khalifa has knocked out eight of the opponents on his record. Vera on the other hand, will be hoping for a rebound from a unanimous decision loss and with that the big task of handing O’Malley the first loss of his professional career.

UFC 252 takes place at the Apex Facility in Las Vegas starting with the Early Prelims, which kicks off at 7pm ET on ESPN/ESPN+, while the main card begins at 10pm ET. On Pay Per View.