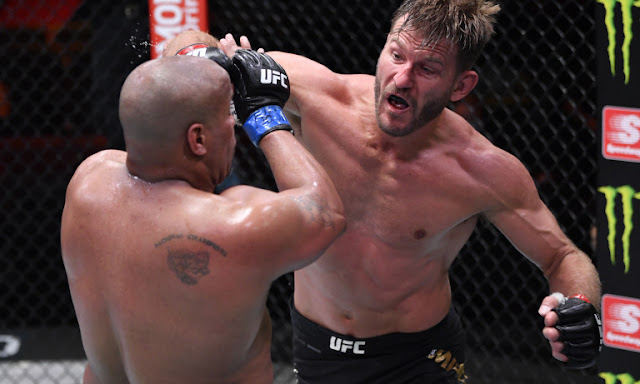 Stipe Miocic retained the UFC Heavyweight championship belt against a game Daniel Cormier, who taking his last ride fought for legacy and gave his best but father time wasn’t taking a break on this one.

Miocic (20-3 MMA, 14-3 UFC) tore down Cormier (22-3 MMA, 11-3 UFC) with a wide range of combinations to retain his title after five rounds. The Judge’s scored the fight 49 – 46, 49-46 and 48-47, all in favour of the champion in the Main event of UFC 252, which too place at the Apex Facility in Las Vegas on Saturday night.
Miocic perfectly executed his striking plan from the opening bell and laying a good foundation for the remaining rounds, while Cormier came out firing power shots that rocked Miocic every time, including one that almost dropped him before the close of the opening round.

The second round was more of the same as Miocic continued showcasing his striking prowess and being more active, while Cormier attacked him with more power shots before a crucial event took place. Miocic faked a bodyshot and connected a big on on Cormier’s Jaw. Cormier just held in till the final bell.

Both fought tactically in the third round until the closing minutes of the round, when Miocic blasted Cormier with a dirty Eye poke that left Cormier fighting with just one eye till the end of the fight.

Miocic controlled the fight from then and whenever Cormier tries to land a home run, the champion clinches him to the cage.

Cormier won their first meeting at UFC 226 with a first round knock out , becoming a simultaneous champion, while the rematch saw Miocic win by TKO in the fourth round at UFC 241