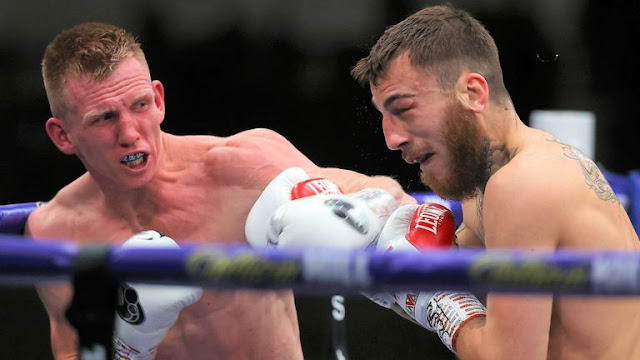 Cheeseman went three fights in 2019 without a victory and without this victory would be thinking retirement. The fight ended with judges Phil Edwards and Ian John-Lewis scoring the fight 116-113 While Howard Foster scored 115-114 all for Ted Cheeseman.

Cheeseman came out firing in the opening rounds, dominated the fight till the fight was drawn into a grueling back and forth battle.

“I’ve seen fighters lose sometimes and the come back to the changing room and they don’t care,” Cheeseman said. “Everyone has seen that every time I lose I am very upset.

Cheeseman got his first break after wobbling Eggington with a right hand in the final minute of the second round, giving him the confidence to create openings and angles in a fight where Eggington got prepared for what he brought to the table.

Eggington was ready for a back and forth battle but Cheeseman was more of a defensive fighter in the early rounds, using discipline and fighting out of trouble. This made Eggington look slow.

In the eight round, things were a little even as both were able to land crushing right hands but Eggington finished the round a fresher fighter of the two. From then on both got engaged in a war many believed the fight will be, with Eggington having the edge in the exchanges.

Up until the eleventh round Eggington had dominated the second round of the fight but things changed and Cheesman took over and won the eleventh, forcing Eggington to make a big difference and push for the final round but Cheeseman fired back, backing him in the ropes by connecting an over-hand. Both still made a show with exchanges when the final bell was heard.