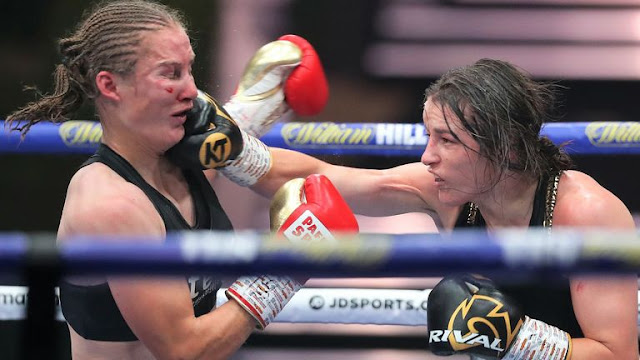 Irish Boxing Star Katie Taylor retained her undisputed title with a unanimous decision win over familiar foe Delphine Persoon after 10 rounds of pure back and forth battle on Whyte-Povetkon Undercard.

Taylor emerged with a narrow disputable decision in their first meeting and with no doubts cleared the question marks on with a wider victory 98-93, 96-94 (X2).

14 months since their first meeting, Taylor started the fight with a determined mindset, engaged Persoon in a serious battle after-which the Belgian had to objection to the Decision.

“This time I respect the result.
“The weight was too much. I ate, ate, ate but didn’t have the power to hurt her.
“I could not hurt her. And if you can’t hurt her, she is technical and runs around. You have to hurt her.
“She deserves the win. I respect her. I’ve got no problem.
“In the second round I broke my nose. Super-feather is my weight, not lightweight.
“My respect to her. She deserves the win today.”

Before the end of the second round, Taylor had already opened up a nasty cut on Persoon but was at the end of a thudding right had but that fight had only begun, as they both engaged in a grueling battle in the fourth.

Both showed sportsmanship, engaged throughout to the seventh round when Persoon landed a Thudding right  and pumped out punches to take the round.

Persoon also lured Taylor into another battle in the eight. Taylor tried stopping Persoon with her right hand in the ninth but 5hat didn’t work out and she kept trying, leaving her efforts only rewarded by the Judge’s after the final round.

“It’s never easy against Delfine, she is relentless,” Taylor said. “I knew I had to dig deep. I boxed better last time. I stuck to my boxing more. That got me through. I hit her with clean shots but she attacked all the time What an amazing two fights for women’s boxing..
“I was more convincing tonight. I got a convincing win.”