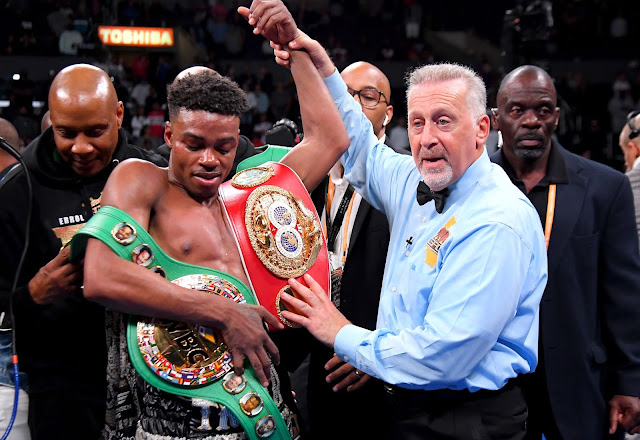 IBF and WBC welterweight champion Errol Spence will be putting his belts on the line against Danny Garcia on November 21st.

Spence revealed the information in a tweet, giving the date but withholding the venue as there is uncertainty about when the COVID 19 restrictions in the United States will be lifted to allow audiences attend live event.

“Done deal the King of the division BACK,” Spence wrote in his Tweet. “Nov. 21st on Fox PPV vs @DannySwift.”
Spence added the hashtags #Mandown and #strapseason to his message.

The Spence -Garcia fight will be officially announced on the 8th of August when Thomas Dulorme (25-3-1, 16 KOs) and Jamal James (26-1, 12 KOs) will fight for the WBA interim welterweight title in a 12 round Main Event at the Microsoft Theater in Los Angeles.

The Fight will mark the unbeaten Unified welterweight titlist first return to the ring since his horrific accident back in October 10th. Spence damaged his teeth and face, with cuts on his face and both during the crash but insisted on fighting a top opponent in his return to the ring.

The 30 year old Spence, will be making his first return to the ring after a one year lay off. He was last seen in the ring back in September 28, when he dropped Shawn Porter in the eleventh round and won a twelveth round unanimous decision, unifying the IBF and WBC welterweight titles.

Garcia was supposed to fight Spence in January but due to the injuries, plans were halted and Garcia instead faced Ukraine’s Ivan Redkach (23-5-1, 18 KOs, 1 NC) , whom he defeated via a unanimous decision at the Barclays Center on January 25th.