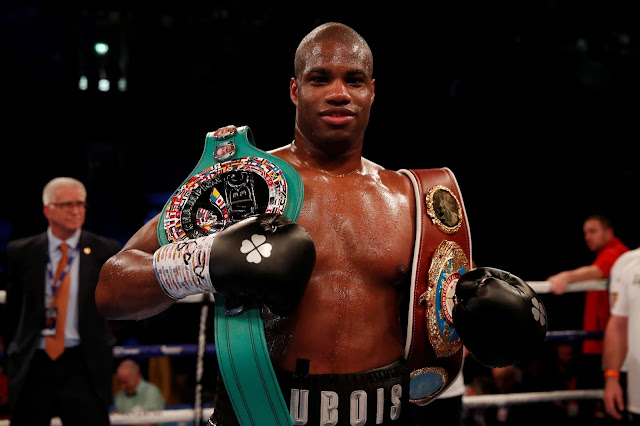 Undefeated Heavyweight Prospect Daniel Dubois (15-0, 14 KOs) made little work of late replacement Ricardo Snijders (18-2, 8 KOs) in the second round of their heavyweight clash at the BT Sport Studios on Saturday night.

Dobois will now turn his focus to his anticipated clash with fellow undefeated Knockout artist Joe Joyce, a fight tentative for October 24th. The date will most likely be shifted due to the uncertainties caused by the COVID 19 Pandemic.
The fight kicked off with Dobois taking the fight to Snijders, land a couple of combinations before scoring the first knock down with a big left hook and after the restart connected another combination to score a quick second knockdown. Before the first three minutes was over, Dobois was able to send Snijders to the canvas a third third time with a combination.

The fight was supposed to be a warm-up fight for Dobois but it shows clearly, Dobois had more resistance and test in training than what he got during the actual fight against Snijders.

“I was just getting warmed up, I was excited to be out there again and, hopefully, next time I will have a proper fighter in there with me, Joe Joyce or whoever is next,” Dubois said. “I needed a fight, any fight really. This was perfect, just getting in and out and I enjoyed.
“I can’t wait to get it on with Joe. I really want that fight. Just a big name next. Anyone will do.
“That’s the next step for me. I need a step up. I’ve won the British and now I need to climb on ever further on trajectory to the world title.”