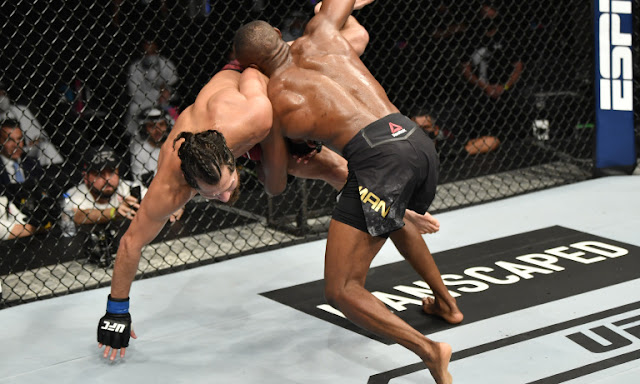 The Ultimate Fighting Championship staged one of the most anticipated and most stagged fight card in MMA history featuring three title fights this past Saturday and among them was the welterweight action between UFC welterweight champion Kamaru Usman and short notice title challenger Jorge Masvidal.

Despite being one of the most anticipated match ups, left fans looking for more action after five rounds.

Usman successfully defended his title with a unanimous decision after dominating the BMF title holder over five rounds in UFC 251 main event which took place at Flash Forum in Yas Island, Abu Dhabi.

Taking the fight after a six day notice as a replacement for Gilbert Burns, “GameBred” tried putting up a show against one arguably the best welterweight in UFC history. Taking the fight to Usman in the open round but ultimately succumbed to one of the best grapplers in MMA at the moment.

Usman took the fight to the Canvas and stayed there, dominating Masvidal throughout the fight to earn a much deserved unanimous decision.

Also on the Card Alexander Volkanovski ran it back again with former champion Max Holloway, emerging victorious with a unanimous decision after five rounds to retain his Featherweight title in the Co Main Event.

Petr Yan stopped Jose Aldo in the fifth round of their bantamweight title fight to win the Vacant UFC title.