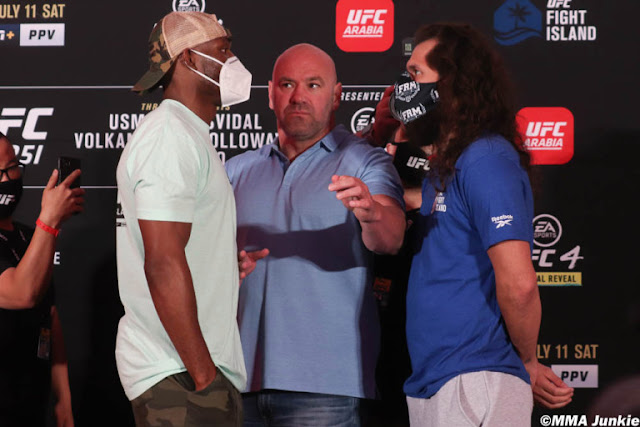 Ahead of the big day UFC 251, the Ultimate Fighting Championship carried out the official weigh in on Friday for the event, which will be headlined by UFC welterweight champion Kamaru Usman Vs short notice replacement Jorge Masvidal.

Featherweight champion Alexander Volkanovski (21-1 MMA, 8-0 UFC), who makes his first Defence against former champ Max Holloway (21-5 MMA, 17-5 UFC) came in at the weight limit of 145. Holloway, who is looking to take his revenge also came in at 145 pounds.

The third title fight was also official as Petr Yan (14-1 MMA, 6-0 UFC) made the 135 pound limit for the Vacant bantamweight title fight against veteran and former Featherweight Champion Jose Aldo (28-6 MMA, 10-5 UFC) , who moves down to Bantamweight for the first time.
Two fighters came in way above the weight limit for the event. Raulian Paiva (19-3 MMA, 1-2 UFC) was 129 pounds for his flyweight bout against Zhalgas Zhumagulov (13-3 MMA, 0-0 UFC) while Vanessa Melo (10-7 MMA, 0-2 UFC) came in at 141 pounds for her bantamweight fight against Karol Rosa (12-3 MMA, 1-0 UFC). Both fighters surrendered 20% and 30% of their fight purse respectively.

UFC 251 will take place at Yas Island in Abu Dhabi later today. Dopeclics will be here to bring the results, Images , recap and Highlights as they happen.