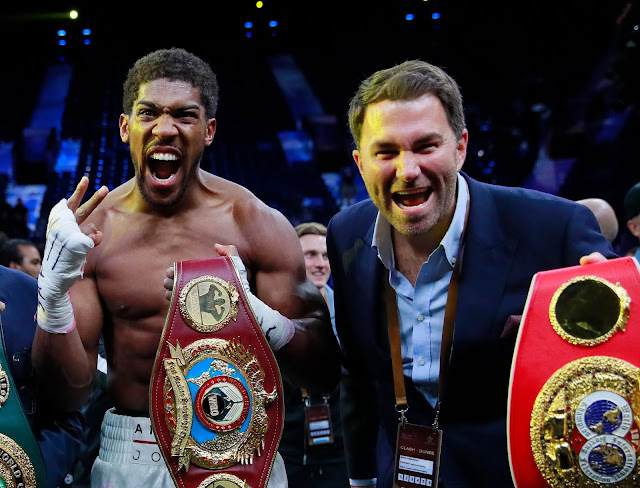 Former two division champion Bernard Hopkins took some time out to give his take on the potential heavyweight showdown between Unified heavyweight titlist Anthony Joshua and WBC champion Tyson Fury.

Both will have to deal with their contractual agreements before thinking of a potential heavyweight unification battle in future. Anthony Joshua will have to face his Mandatory challenger Kubrat Pulev while Tyson Fury is slated to fight former champ Deontay Wilder in a trilogy.

The two will then be meeting in 2021, if they both defeat their upcoming opposition as a two fight series has been discussed by the parties and will both have a 50-50 purse split in the first meeting, while the rematch favours the victor with a 60-40.

Hopkins will love to see Anthony Joshua get tested by a real opposition and believes that Fury perfectly fits the occasion. However, he believes Joshua will be able to overcome every challenge Fury brings to the table.

“The heavyweight division was asleep for a decade until Deontay Wilder, Joshua and Fury surfaced. Four or five other names are knocking on the door to be threatening contenders,” Hopkins told Sky Sports.

“But let’s just deal with those three right now. Joshua vs Fury is a fight that both guys could win or lose. I like Joshua to be tested, to get his feelings hurt early – that might be a knockdown but he will get up.

“Because of the lesson that he learned being, not unprepared, but overconfident he paid a big price. He redeemed himself. Now that is in his memory – what not to do ever again – Joshua beats Fury by knockout late. It will be an interesting, exciting five or six rounds at the beginning. Then Joshua’s athleticism, boxing IQ and experience would overwhelm Fury.

Hopkins, sees Joshua breaking down and stopping Fury in the late rounds to win a fight that could crown him the Undisputed Heavyweight Champion in a division that presently has the highest level of spotlight and competition.

“Joshua would come out of a dust-storm based on his experience. At this point he has to make a really serious statement based on [the Andy Ruiz loss]. Redemption. This fight is Joshua’s stamp of approval of being great. He’s not there yet. He is in legacy building mode.”