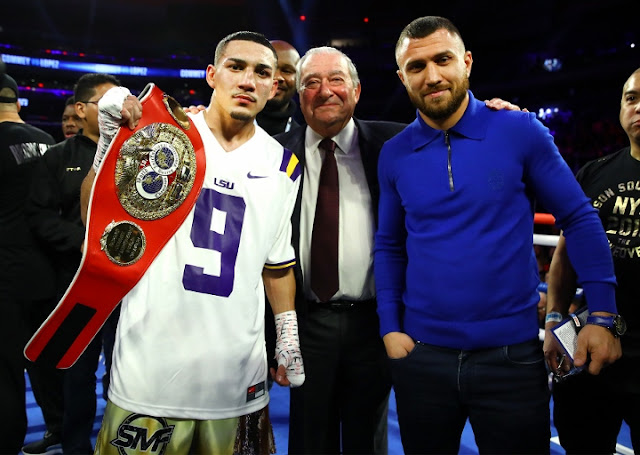 Bob Arum’s Top Rank has finally fixed a date for the anticipated unification fight between  between Vasily Lomachenko and Teofimo Lopez after recently enduring criticism for the level of fights his promotion has been able to dish out in recent weeks.

The 88 year old promoter is planning to put the Lomachenko, who holds the WBA and WBO lightweight titles against IBF lightweight champion Teofimo Lopez on the 19th of September in a yet to be announced venue in Vegas.

“Our tentative date for that fight is the 19th of September,” Arum told BoxingScene.com. “That’s when we’re hoping to do it.”

The fight between Vasily Lomachenko and Lopez will be dependent on how soon crowds can gather during sporting events as Top Rank hav already discussed the possibility of bringing the fight to one of the MGM Venues in Las Vegas.

Top Rank has since the pandemic been staging evwnts at the MGM Grand Conference Center and that is set to continue through July and August with hopes that by the end of this year or early next year fight venues could be filled to full capacity.

“In August, we’ll continue to have all ‘Bubble’ fights, with no spectators,” Arum said. “I think starting in September, you’ll see us doing fights with spectators, small numbers of spectators. And hopefully, by the end of this year and the beginning of next year, we’ll be back to fights with full capacity [at venues].

“Right now, we are targeting Vegas for most of our events,” Arum said. “One, because when we open them up to spectators, the town really needs events with spectators to get up and rolling again. And they’ve been so cooperative with us with this ‘Bubble’ thing that we owe an obligation to the state of Nevada and Las Vegas to do as many events as we can once we get up and running with spectators. That’s not to say we might not use other places, but that’s what we’re looking to do, primarily Las Vegas. And then, as we get into November, December and next year, we’ll look to do big arenas where we can pack more people in.”

Vasily Lomachenko (14-1, 10 KOs) and Brooklyn’s Lopez (15-0, 12 KOs) where initially slated to take place on the 30th of May at the Madison Square Garden but things went south ones the Corona Virus pandemic began, leaving the yet to be finalised fight abandoned till now.