Skip to content
HomeSports NewsUFC On ESPN 12 Weigh In Results – All Fighters Including Poirier, Hooker Made Weight

UFC On ESPN 12 Weigh In Results – All Fighters Including Poirier, Hooker Made Weight 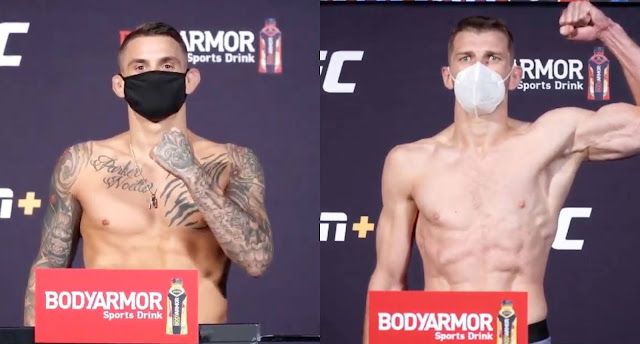 The Ultimate Fighting Championship will be back again with UFC On ESPN 12 on Saturday night and to that effect, all 20 fighters for the event made weight for their respective bouts, including the headliners Dustin Poirier and Dan Hooker.

The former UFC interim lightweight champion Dustin Poirier was the first to to hit the scales and tipped it to 156 pounds, while his opponent Dan Hooker went on 10bm8nutes later tipping it at 155.5 pounds.

The Co-Main event has Mickey Gall taking on Mike Perry in a welterweight battle. Both made weight with Gall hiring the scales at 170 at the dot while Mike Perry tipped his to 171 but before then tried to weigh in without a face mask.

UFC On ESPN 12 weigh in’s took place at the Apex Center in Las Vegas, which will also play host to Saturdays event.