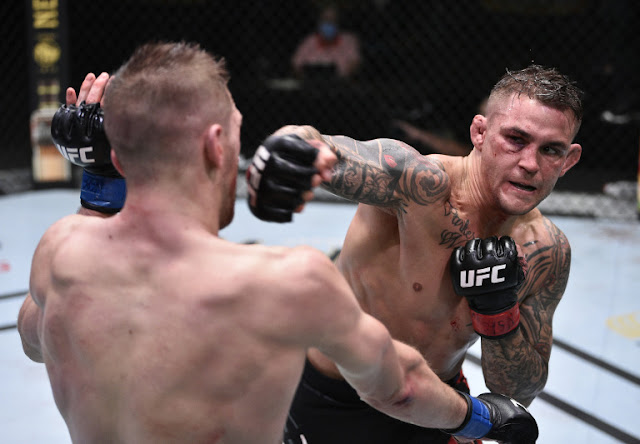 Dustin Poirier and Dan Hooker engaged  in a bloody and reckless battle that ended up “Fight Of The Night” and could be considered a contender for “Fight If The Year” on Saturday night at the Apex Center in Las Vegas.

Both fighter got bruised and bloodied after abandonment of anything personal, aggressive exchanging damaging blows and shots at one another for the best of 25 minutes which saw Poirier, the fresher of the fighters in the last round emerge winner with a very thin margin on the judge’s score cards.

The former interim champion Poirier (26-6 MMA, 18-5 UFC), finished strong and looked stronger in the final round, which seem to have been the difference in the fight, earning him a 48-47, 48-47, and 48-46 score on the judge’s score cards. His sixth win in his last seven outings.

The second round could be considered one of the best rounds in UFC history with both fighters giving up everything in their tanks. Poirier went ballistic with his switch combinations of Elbows and Blows , while Hooker, fighting behind his Jab constantly found home for them.

Hooker seemed to have had the edge after the first two rounds but that was just te beginning for Poirier, who after using his best of combinations, which could end fights against less prepared opponents or low level figgters, quickly switch to his ground game, taking hooker by surprise, constantly seeking for submission after submission, even when his back was on the ground.

Poirier seemed more determined to win his eight appearance in the UFC, controlling the final five minutes of the fight and landing punches until the final horn was heard. Speaking after the fight, Poirier gave his team credits for the win, which was his seventh career decision victory.

“I trusted in my team and my skill and I pulled another one out,” said Poirier, who competed for the first time since losing to UFC lightweight champion Khabib Nurmagomedov in September 2019. “I feel like I had another few rounds in me.”

Hooker just saw his three fight winning streak get snapped by Poirier, who was fighting for the first time since losing his title attempt against Khabib Nurmagomedov in his last outing.
The lightweight battle between Dustin Poirier and Dan Hooker was the main event of UFC On ESPN 12 which took place at the Apex Center in Las Vegas, Nevada. It was broadcasted Live on ESPN/ESPN+.