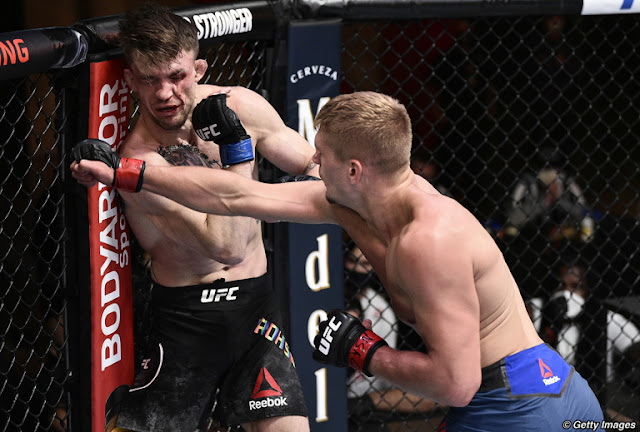 Lightweight prospect Max Rohskopf (5-1 MMA, 0-1 UFC) had quite a UFC debut, taking his fight against Austin’s Hubbard on six days notice but opted out of the fight after the second round, quitted on his stool before the start of the third round.

The 25 year old had so much courage taking the fight in such a short notice but didn’t go according to his plan as he was subjected to two rounds of beating, which was much evident in the second round. Hubbard (12-4 MMA, 2-2 UFC) easily handed him a one-sided beatdown.
Rohskopf walked back to his corner, telling his coach Robert Drysdale and corner-men he wasn’t fighting anymore but that didn’t go well with the Coach, who ignored his plea to call of the fight and attempted leaving Rohskopf in the Octagon before the referee’s attention was attracted.

Mark Smith walked up to Rohskopf, who had refused to leave his stool despite his being ignored and told to continue against his will. Smith asked, if he wanted to continue the fight and he answers no. The fight got called off immediately.
The Nevada State Athletic Commission has promised to investigate the event and the sequence of occurrences that led to his refusal to continue.

“That’s something we will take a look at,” NSAC executive director Bob Bennett told ESPN. “We might want to take disciplinary action on them. That doesn’t sound like they are looking out for a fighter. Obviously, he didn’t want to come out (and fight).”

Updates on the 25 year old was given by his manager Brian Butler, who said he had issues due to the short notice weight cut and a pre-existing turf toe. 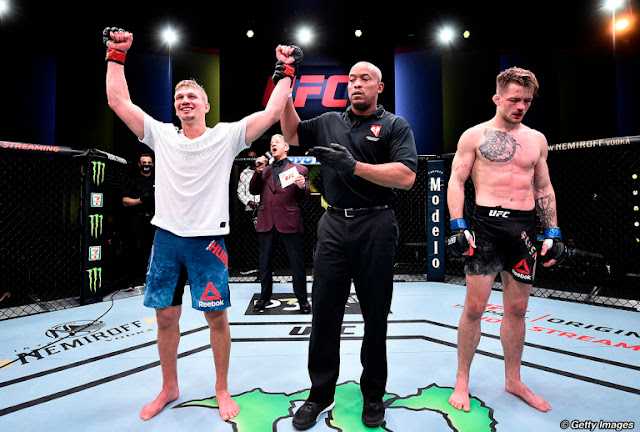 There have been recent calls on corner negligence and refusal to stop fights, when their fighters have clearly been overwhelmed and handed a one sided beating. An example is that of Anthony Smith, who got totally manhandled by Glover Teixeira and the corner didn’t stop the fight.
Other Results – Raquel Pennington Defeats Marion Reneau Via Unanimous Decision
The second case is Amanda Nunes one-sided 25 minutes beatdown of Felicia Spencer that led to a debate on whether the fight should have been stopped.