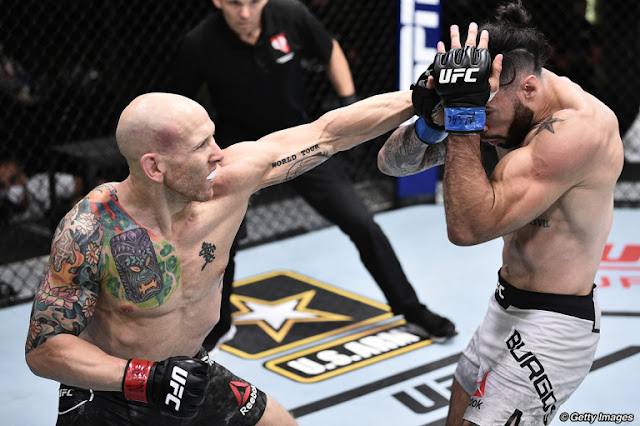 Featherweight contender Josh Emmett fought through injury from the first fifteen minutes but did his best to defeat Shane Burgos after an absolute war in UFC On ESPN 11 Main event on Saturday night at the Apex Center.

The battle between the featherweight was basically a brutally back and forth spectacle, with both getting tested and showing alot if conditioning but at the end, Emmett’s power was the difference as he ended up scoring two Knockdowns in the third round to seal the victory on scorecards 29-28 twice and 29-27.

“He’s a solid dude,” Emmett said about Burgos afterwards. “I think he’s going to do super well. He’s a tough guy. All the respect in the world. I knew it was going to be a hell of a fight.”

Both featherweights went out looking for that big shot from the opening round, with Josh Emmett swinging out like wild bull and Shane Burgos aggressively charging forward and while trading shots with Burgos in the first few minutes he picked up an injury, something he did his best to disguise through the remaining minutes if the fight.

Burgos kept on absorbing shots from Emmett, while coming forward targeting his opponents injured knee. Emmett kept looking for the Knockout, landing with some serious power but Burgos kept coming forward and upped his output.

Burgos came out firing in the third just like in the first two rounds but was met with a thunderous counter left hand that sent him crashing to the canvas. Moment later, he connected another left hand that sent Burgos again to the canvas just as the first time. This time he followed up looking for the finish but Burgos was durable enough to survive to the end of the round.

Emmett had to limp out of the cage after the fight but that was all as the thrill of winning definitely overwhelmed the pain of the injury.

“I’m tired of being the gatekeeper,” Emmett said after facing an opponent behind him in the UFC rankings. “I’m not fighting anyone else behind me anymore. I want a shot at that title eventually.