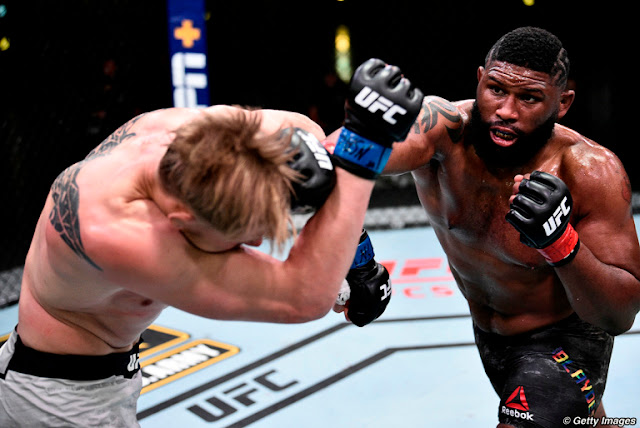 UFC heavyweight contender Curtis Blades picked up one of the biggest wins of his career with a unanimous decision victory against former Bellator Champion Alexander Volkov on Saturday night at the Apex Center in Las Vegas.

Going the distance for the first time in his Career, Blades dominated Volkov with his ground game, scoring 14 takedowns coupled with some good ground work to earn a 49-46 twice and 48-47 on the judge’s scorecards.

Blades has continued to bring down heavyweight oppositions, whose names are definitely not Francis Ngannou. Since his pair of losses against Ngannou, Blades has now rebounded with four straight wins and just those two losses in eleven appearances in the UFC.

“It was a good experience to go 25 minutes,” Blaydes said. “I know there are things I gotta work on, but a win is a win. I know I need to work on my conditioning after the third round. I’m happy with the win. Volkov is legit.”

Blades showed a little hesitation, taking on his Russian foe but ones he did, it was really the beginning of a nightmare for the former Bellator champion. Blades ensured Volkov remained on the canvas for most of the first round striking to his back throughout and taking him back to the canvas ones he makes it back to his feet.

The second round saw Volkov attempt using his arsenal and reach advantages against Blades but he quickly got that off balance with a stunning overhand right hand before resuming his ground assault no Volkov.

Blades just continued his unslaught and dominance, repeating everything he has been doing from the opening round. Not too long after the beginning of the fourth round, Blades scored two knockdowns to set a new record for the number of takedowns in a heavyweight fight.

Herb got curious towards the end of the fourth round and called for a split , after-which Volkov had his best moments of the fight landing Knees and a take down.

Blades almost gassed out in the fifth round, as power seemed to change hands and question marks in his conditioning became evident but the he regrouped, scoring two more take downs before the fight time fizzled out to seal the victory.

The loss leave Volkov 3-2 in his last three three outing.