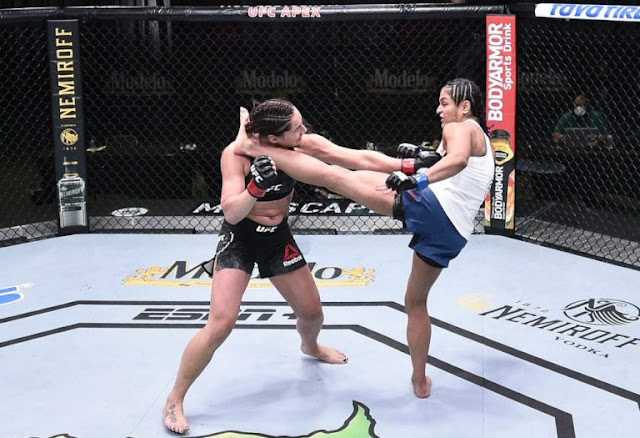 Cynthia Calvillo was tactically smart in her move to flyweight, using take downs to score points against recent title challenger Jessica Eye and was able to pick up a unanimous decision on UFC On ESPN 10 at the Apex Center in Las Vegas on Saturday night.

Despite having a size disadvantage, Calvillo (9-1-1 MMA, 6-1-1 UFC) out-striked Eye (15-8 MMA, 5-7 UFC) after both shared a close opening round to pick up a pair of 49-46 scores and a 48-47 on the judge’s score cards. The return to flyweight was due to her difficulty making weight in two of her last three fights.

The first round was mostly even as both being fresh were able to withstand and throw shots of their own. Calvillo was the first to fire a combination but her finishing over-right hand got dodged by Eye, who tried getting inside but eventually got caught by a short left uppercut. In about a minute Jessica Eye pushed her back with a combination complimenting it with a stiff jab. Calvillo then connected a high kick on Eye to the head taking her a little off balance but the fight reamained on feet. Her second attempt was caught by Eye, who tried sending her to the canvas.

Both fighters got their punches on point in the third round while Calvillo complemented that with leg kicks, while hoping for an opening for another takedown to continue her second round dominance. Eye then land a big right hand with just over a minute left in the round, forcing Calvillo to go low the score another take down before the horn was heard. 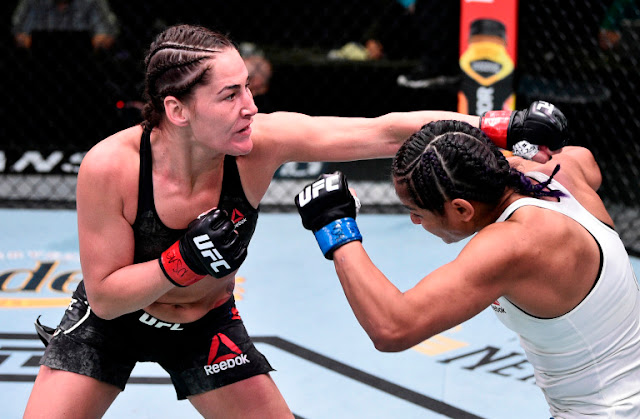 Calvillo sent Eye to the canvas again, 30 seconds into the fourth, after Eye connected a kick which she held on to and dragged her to the mat. After mounting on Eye’s back, she searched for a rear naked choke and hammered her with punches to the head. Eye got back to her feet after scrambling out of her predicament and tried taking getting the fight back in her favour. She sent Calvillo back with punches and dominated from then but didn’t do enough to win the round.

Things got slow in the fifth round and at this point Eye needed a stoppage to win the fight. A spinning back kick from Calvillo connected but didn’t do damage to Eye. Eye continued throwing big right hands, while searching for a stoppage but Calvillo had enough and score a takedown, searched for a choke but was unsuccessful as Eye found her way back to her feet. She wasn’t able to do something tangible before the final horn was heard. 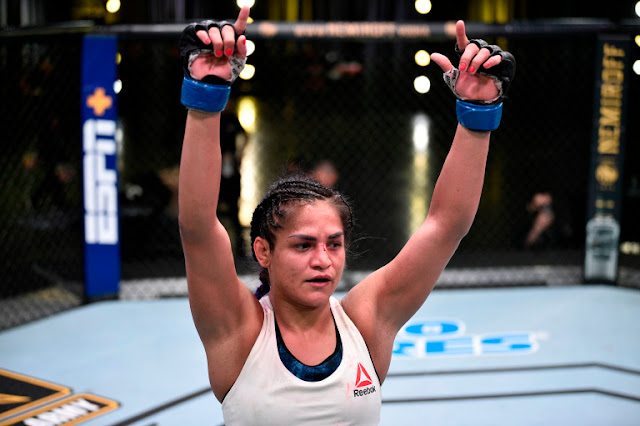