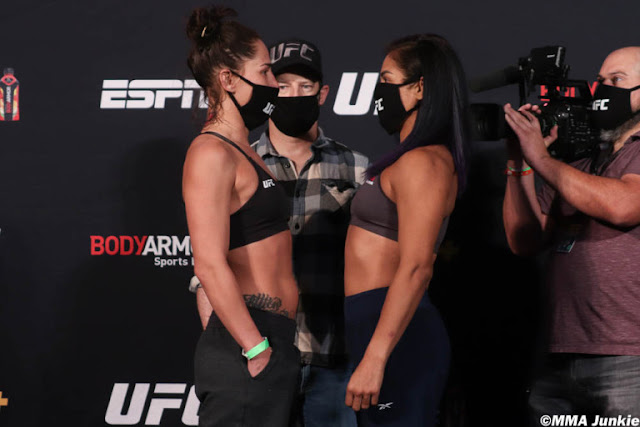 The biggest MMA Promotion Ultimate Fighting Championship will be taking Center stage again this weekend with UFC on ESPN 10 headlined by Jessica Eye Vs Cynthia Calvillo at the Apex Center in Vegas, Live On ESPN.

Dopeclics has the full Results Images and Highlights of UFC On ESPN 10. Twitter Updates Videos and Recaps will follow after the event.

The fight which will be the second Women’s Headlining bout in the space of two week will be a fight that will decide the Flyweight division. The fight will look to produce a worthy challenger for Valentina Shevchenko’s Flyweight title.

Cynthia Calvillo will be making his debut at Flyweight after having so many issues making weight in her former division. She will definitely be out to overcome the size advantage Eye will be possessing in their meeting this evening.

Eye tipped the scale 0.25 pounds above the weight limit and was seen visibly shaking on the scale before apologising for missing weight. Calvillo had no such issues but might have an advantage as her fitness could be notice in the later rounds having shifted from a three round fight to five rounds.

The co – main Event will have two rising middleweight prospect Marvin Vettori takes on Karl Roberson battle as they both look to become title contenders. They were both slated to collide back in match but Robertson Who missed weight by five pounds had issues making weight and the fight was forced off. 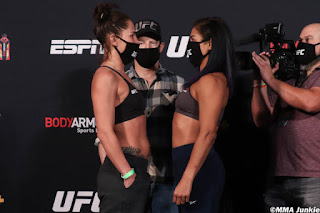