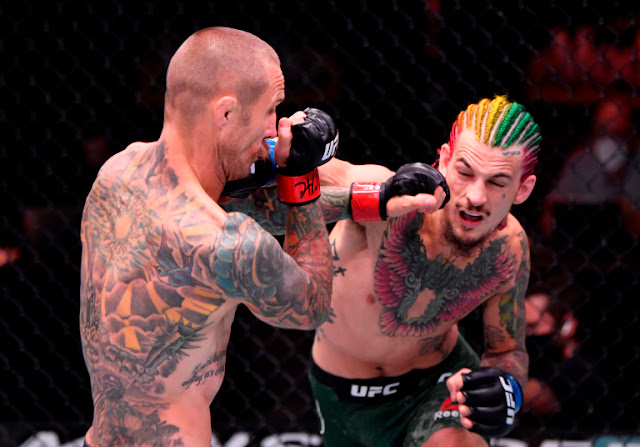 Sean “Suga” O’Malley made a statement, building on the rising speculation of being the real deal with a one punch Knockout victory over former WEC bantamweight champion Eddie Wineland in the first fight of UFC 250 main card on Saturday at the Apex Center in Vegas.

O’Malley has always had the fire and having dropped his last four opponents but has never had a Veteran name on his resume before the fight on Saturday. However, Wineland was just enough to hit that mark on his resume, scoring a “Knockout Of The Year” contender.

The fight ended 1:45 minutes into the first round of the fight, with a thunderous right-hand from “SUGA” was enough to leave him undefeated.
GET UPDATES ON YOUR FAVOURITE SPORTS

The fight kicked off with some huge vibe, with both looking like to land a huge shot. Wineland (24-14-1 MMA, 6-8 UFC)  was making use of his usual unpredictable movement, while O’Malley was quick to find his range and complemented that with kicks from range.

The big moment came towards the middle of the first round when O’Malley baited Wineland with a left and after the Veteran followed landed a big right hand that sent Wineland crumbling to the canvas to end the fight.

The victory was O’Malley’s eight first round finish while Wineland has lost three of his last four fights.

The fight between by O’Malley and Wineland was the Opening Bout of UFC 250 main Card  on Saturday night at the Apex Center in Vegas. The fight Aired on Pay-per-view, following prelims on ESPN and Early Preliminary card on ESPN+/UFC fight Pass