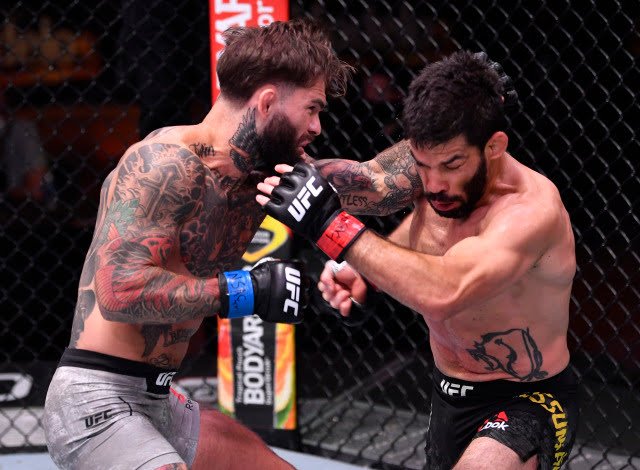 Cody Garbrandt showed he still has a lot left in him with a second round brutal Knockout victory over Raphael Assuncao in the Co main event of UFC 250 on Saturday night at the Apex Center.

The Brutal Knockout shot came up just a minute left in the second round. Garbrandt (12-3 MMA, 7-3 UFC) connected a right hand on Raphael Assuncao (27-8 MMA, 11-5 UFC), which sent him head first to the canvas, forcing Keith Peterson to end the fight immediately.

The first round was totally dull as both fighters opted for a chess match, calculative and throwing strikes from a distance. The volume of strikes were low as Garbrandt was out figuring his range while Assuncao was busy changing his stance.
GET UPDATES ON YOUR FAVOURITE SPORTS

The second round was much more interesting as Garbrandt went back to targeting Assuncao’s leg. Then towards the middle of the round, Garbrandt connected a huge strike that sent Assuncao to the canvas but that instigated a trash talk segment, with Assuncao claiming that was a slip.

But that was all nothing as the next punch was enough to end the fight. Garbrandt connected the brutal shot with just a minute left in the second round to pic his first victory in 3½ years.

Garbrandt snapped a three fight winning streak which dates back to November 2017, when he lost to TJ Dillashaw, while Assuncao lost three fights in a row for the first time in his professional career.

The Bantamweight Bout served as the Co main event of UFC 250 which took place at the Apex Center in Las Vegas.live on Pay per View, following prelims on ESPN and Early Preliminary card on ESPN+/UFC Fight Pass.
Cody Garbrandt Vs Raphael Assuncao
UFC 250