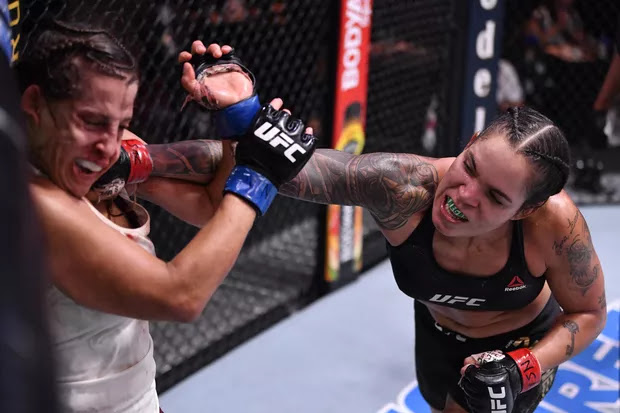 Nunes (20-4 MMA, 13-1 UFC) registered her 11th consecutive victory with a one-sided beat down on Spencer, Mauling her through five rounds to defend her title for the first time since defeating Cris Cyborg back in December 2018.

Spencer on her part showed toughness, holding on despite being fully dominated till the final horn. Nunes easily took the win on scorecards 50-44 twice and 50-45 for a unanimous decision.

Nunes with the win added another signature to her Greatest Of All Time tag, becoming the first double champion to successfully defend the two championship belts while holding on to the belts. Nunes remains the longest reigning UFC champion and successful defended titles at Featherweight and Bantamweight.

Nunes dominated the fight from the opening horn and looked like, she was going to add another Knockout after connecting her first blows which forced Spencer to try grappling and use of the clinch. Nunes surprised her with a thunderous whizzer, sending Spencer to the canvas and she spent the remaining rounds raining blows and elbows from the top position.

Nunes’s dominance couldn’t be argued at this point as she kept landing Combinations, keeping Spencer on the back-foot. Spencer then went for a takedown but that was eventually maneovered by Nunes into a takedown of her own.

By the their round the fight was totally controlled by Nunes, who seemed most likely to ended the fight, when she pleased. Surprisingly, Nunes kept the fight on foot, landing at will as the fight looked more of a sparring than a contest. Towards the middle of the third, Nunes blasted the mouthpiece off Spencer with an over-right hand and in the final minutes, landed a brutal uppercut, complimented it with a series of let kicks that left Spencer limping to her corner.

Nunes began hunting Spencer’s legs with Kicks In the fourth, hunting her down as she went out for the finish. Towards the end of the round, Nunes put together a combinations and almost knock Spencer down to the canvas with them. A rear naked choke was attempted by Nunes but Spencer survived the round. However she went to her corner with hematomas swelling and blood streaked on her face.

Nunes took the fight to the canvas in the fifth round, where she battered Spencer through to the final minute. The referee Herb Dean called for a timeout but the ring side doctor cleared Spencer to finish the fight.
The win leaves Nunes unbeaten since 2014, a champion since 2016 , eleven consecutive victories and her fourth career decision. Spencer on the other hand is 1-2 in her last three outings.
The UFC featherweight championship fight was the main-event of UFC 250 which followed the prelims on ESPN and early Prelims on ESPN+/UFC Fight Pass.
UFC 250