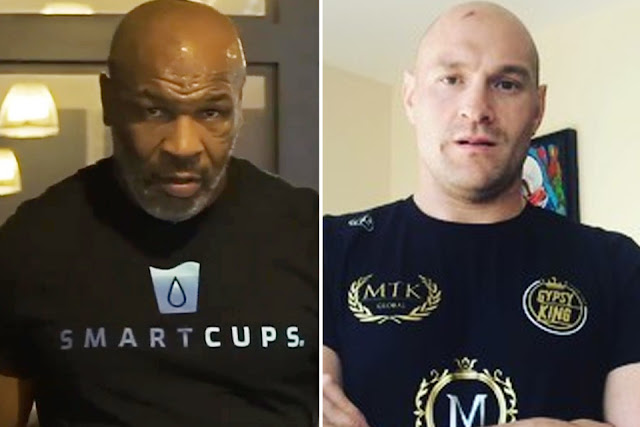 The WBC heavyweight champion Tyson Fury has reveals he had also been contacted few weeks ago to have an exhibition with former two time undisputed champion and Boxing Hall Of Famer Mike Tyson.

Mike Tyson, who has been inactive for 15 years has recently been involved in talks of a potential comeback, which will only exhibition bouts aimed at raising money for charity.

Mike Tyson put the whole world on alert with social media videos showcasing his speed and power with most of those videos going viral and racking over a million views.

Tyson Fury has always had a thing for Mike Tyson apart from being named after him at birth but wasn’t impressed when presented the opportunity to actually share the ring with his Icon because the financial aspect of the deal was encouraging.

“His people contacted me, me and Mike had a phone call, it was all real but never materialized. Someone who was offering the money to Mike came back and offered us peanuts completely. Mike was talking about $500 million figures but what came back on paper was a joke, it was crazy,” Fury said to IFL TV.

“I did have a $10 million offer from ESPN to do the fight as an exhibition but I think everyone has moved on now.”

Tyson Fury also admits his interest in fighting Mike Tyson but says it will only place him in a lose-lose situation which, will definitely not be good for his professional career at the moment.

“I would have just loved to share the ring with him and move around. But if he had won then people would have said I was rubbish because a 53-year-old beat me and if I had beaten him then I would have been a bully,” Fury said.

“It was a lose-lose situation for me. It was money I didn’t need to fight a man past his best.”