Shakur Stevenson Breaks Down Felix Caraballo, Stops Him In Six 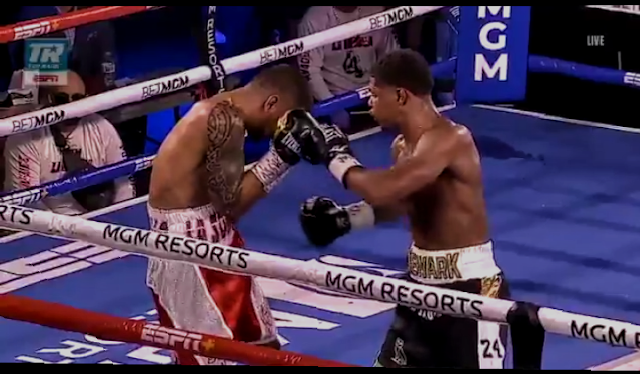 WBO featherweight champion Shakur Stevenson made a successful 130 pound debut against Felix Caraballo, working him down to a sixth round stoppage victory in a non title fight at the MGM Grand Conference Center on Tuesday night.

Stevenson toyed with his opponent, breaking him down with every shot before, eventually ending the fight with a big body shot in the sixth round. The shot sent Caraballo to his knees and his gloves on the canvas and while stuck there because of the pains, the referee Tony Weeks was forced to end the fight at exactly 1:31 of the sixth.

With the win, the 2016 silver medallist Stevenson retained his unbeaten record and improved to (14-0, 8KOs). Stevenson was placed a 100-1 favourite, heading into the fight and he proved right the bookmarkers by winning all the five rounds (50-44, 50-44, 50-43) before the stoppage, dropping Caraballo (13-2-2, 9 KOs) twice in the first round and in the sixth respectively to hand h his first Knockout loss in over six years as a professional.

The fight carddcard was the first to be staged in the United States since the 13th of March, after which many cards including one which was to feature Stevenson got cancelled due to the Corona Virus Pandemic.

Caraballo entered the fight on a five fight winning streak and took the step up in competition in just a month’s notice. However, his competition level was far less than that of Stevenson, which was evident during the fight.

Caraballo took a knee towards the closing minutes of the first round after being hit by a big right from Stevenson but he claimed to have tripped after his legs got tangled. Caraballo tried to be a little more careful after the restart but Stevenson regained his range and unloaded a series of combinations to the head and body of the 33 year old.

After earning the knockdown in the opening round, Stevenson spent time picking Caraballo apart in the second, connecting straight rights and right hooks on his aggressive and come forward opponent, who mostly found it difficult connecting flush punches.

The fifth round was a little better than the fourth but mostly dominated by stevenson, who snapped Caraballo’s head backwards with an uppercut towards the end of the fifth round. In the six, Stevenson got warned for a low blow and forced Weeks to call for a break 1:59 minutes into the round but that was the beginning of the end as Caraballo was sent to the canvas 20 seconds later after a body shot that eventually ended the bout.

Stevenson fought for the first time since defeating Joet Gonzalez (23-1, 14 KOs) with a unanimous decision to win the WBO Featherweight title, which was vacated by Oscar Valdez at the Reno Sparks Convention Center in Reno Nevada.