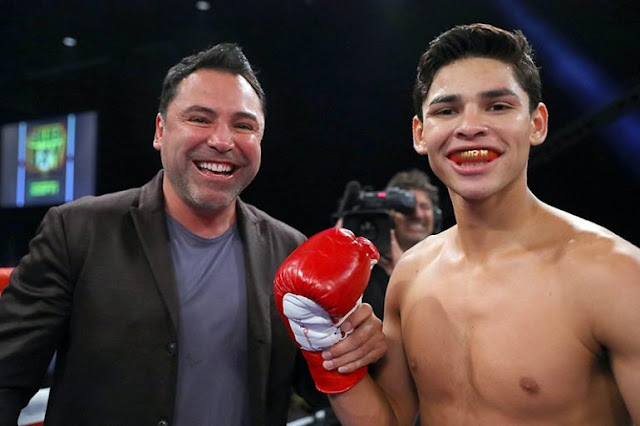 Golden Boy C.E.O Oscar De La Hoya has been taking the responsibility of grooming one of the fastest rising Boxing Stars of our edge Ryan Garcia.

The 21 year old Ryan Garcia is coming off back to back knockout victories against some tough contenders in his division. However, De La Hoya believes that fighting former four division champion Jorge Linares at the moment will be one of the toughest test of his career.

“I saw Linares train the other day, he sent the video over, and he looks like a machine,” De La Hoya told Ring Magazine. “He looks incredible. So when I look at a fight between Ryan and Linares, it’s a fight that worries me. Should I put Ryan in with Linares just now or should I throw him in with the lions? … We have to do our job as promoters and make sure we match him up perfectly with guys like Linares with guys that are going to take him to the next level. and can possibly even beat him.”

Garcia and Linares have been having a serious clash on social media for about a month now and looks just a matter of time before they collide in the ring. There was even a plan to put the two in a ring at Staples Center before the Corona Virus pandemic, lockdown and travel restrictions.

“[Garcia and Linares] are going back and forth on Twitter and Instagram, and it’s actually building up the fight,” said De La Hoya. “Once we do put that fight together, it’s going to be one of those fights that you don’t want to miss. That’s what I’m talking about with Ryan. He’s so popular. We don’t know how great he can be in the ring yet.”

The promotion also had plans of putting him back in the ring with Linares, in their first fight back on July 4th but that hnor will now be handed to Virgil Ortiz on July 24.

“Due to Team @KingRyanG decision not to accept a July 4th bout, we will now return in late July with the future of boxing, @vergilortiz,” De La Hoya tweeted earlier this month. “[M]ore exciting details to follow @GoldenBoyBoxing.”
“You do realize you’re supposed to be my promoter not hater right?” Garcia replied in a since-deleted tweet.

Oscar De La Hoya, has had his own share share of media exchanges with team Garcia but best prefers, the young prospect targets his social media jibes at his possible opponents. However, Garcia has also been calling out many top fighters in the weight division, hoping to land a big challenge and a payday to compliment.