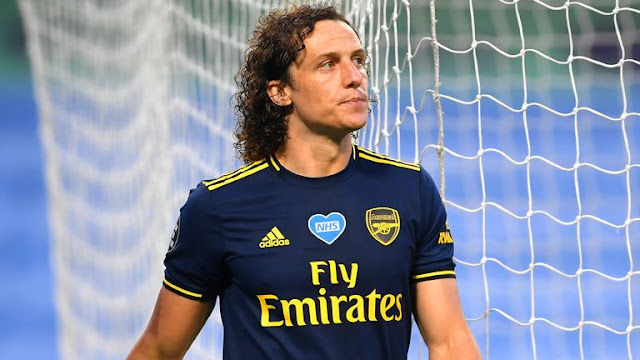 The Citizens marked the return to English Premier League action with a 3 nil victory over 10 men Arsenal FC at the Etihad Stadium on Wednesday June 17th. Thanks to two awful errors from Brazilian defender David Luiz.

David Luiz came in as a substitute in the 24th minute after being brought following Pablo Mari’s injury, lasted only 25 minutes on th pitch and within that period committed two serious errors that saw the Gunners trail with two goals before his sending off.

The Brazilian’s mistake gifted Raheem Sterling the opener before half time and again hauled down Riyad Mahrez in the penalty box, early in the second half. Kevin De’bryne buried the resulting penalty in the 51st minute. Phil Foden added to Mikel Arteta‘s woes before the final whistle.

The win for Manchester City makes certain, Pep Guardiola‘s side will finish the season in the top four and also means that Liverpool won’t be leaving the Premier League Trophy during the weekend when they face Burnley.

The loss for Arsenal leaves them eight points behind fourth place Chelsea FC and cripples their chances for a late top Champions League Qualifications. The loss is Arsenal’s first for the year but their heaviest defeat since Arteta took over.