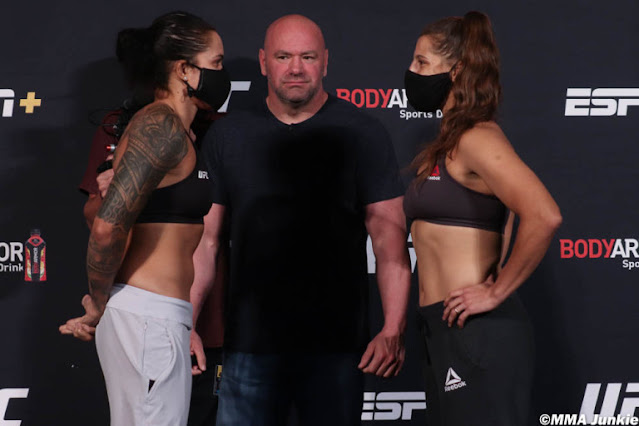 The Ultimate Fighting championship will hit us ones again on Saturday with UFC 250 and all fighters on the card made weight for their respective bouts during the official weigh ins, including th Main Event bout between Amanda Nunes and Felicia Spencer.

The Weigh In’s took place at the Apex Center and that remains the Venue for the event in Saturday, whose main card will air on Pay-per-view following preliminary card on ESPN and Early Preliminary card on UFC Fight Pass/ESPN+.

Amanda Nunes (19-4 MMA, 12-1 UFC), The simultaneous Bantamweight and Featherweights titlist will put her title on the line against challenger Felicia Spencer (8-1 MMA, 2-1 UFC) in the main event as she looks to pile on her G.O.A.T credentials.

Both fighters came in within the fight limit. Spencer tipped the scale at 144.5 while Amanda Nunes was 145 at the spot for the headlining bout.

Nunes will be hoping to make this his 12th consecutive victory in the UFC, her 2nd in UFC featherweight competition, after winning the title in her first fight in the division against Cris Cyborg.
Spencer will be making her fifth appearance as a Featherweight in the UFC, the most appearances in the division, tied with Megan Anderson and Cris Cyborg. However, there is a big gap of experience between the two.