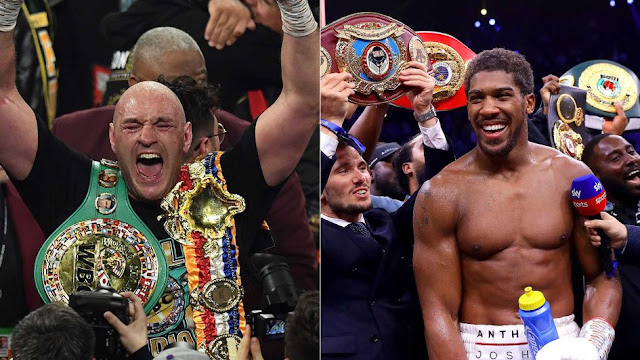 Since Tyson Fury successfully dethroned Deontay Wilder, there has been a big buzz about a possible unification fight with fellow Brit and unified heavyweight champion Anthony Joshua, with Undisputed status at stake for the winner.

However, they both have primary assignments to attend to, each of were set to take place in the summer before the Corona Virus pandemic disrupted everything sports and forced the postponement of every major boxing event.

The major development was first shared by ESPN’s Mark Kriegel and in his report , said representatives in both camps hace had talks ahead of a possible showdown between British Giants, who hold all the major boxing heavyweight titles and both could go down as the biggest boxing fight in UK’s History.

It’s been clear that Eddie Hearn, who promotes Anthony Joshua (23-1, 21KOs) under the MatchRoom Promotions has been having talks with Fury’s Managers MTK Global, whom the “Gypsy King” penned a contract with back in 2017. Fury is Co promoted by Bob Arum’s Top Rank and Frank Warren’s Queensberry Promotions.
Subscribe To Live Updates
On Your Favorites Sports

However, the two fighters will have to overcome a major huddle to make the fight happen as they both have already signed contracts for fights, which they presently await a new date. Joshua was slated to face his IBF mandatory challenger Kubrat Pulev a month after Tyson Fury takes on Deontay Wilder in an anticipated trilogy.

Manchester’s Tyson Fury locked horns with Alabama’s Deontay Wilder in a rematch back in February 22nd and defeated him via seventh round TKO to claim the title which the “Bronze Bomber” has held for over five tears and defended a record 10 times.

The rematch happens about 15 months after their first meeting, which ended a controversial 12 round split draw , with Fury getting up from the canvas twice to finish the epic fight. 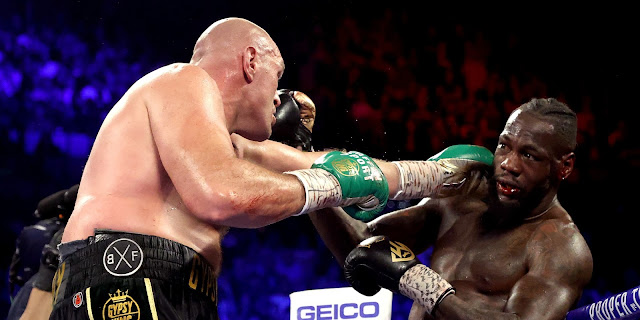 “As far as we are concerned, the next fight for Deontay Wilder is the third fight with Tyson Fury,” Shelly Finkel, Wilder’s career-long co-manager told BoxingScene.com. “Unless we are told different, those are the only plans we have for Deontay’s next fight.”

If the fight is to happen, then a step aside fee has to be offered to both Deontay Wilder and Kubrat Pulev who has been the long standing Mandatory challenger to and Joshua’s IBF heavyweight title.

Kubrat Pulev knocked out Hughie Fury back in 2017 and has since retained his place as a top heavyweight. He reluctantly allowed Anthony Joshua to face Andy Ruis Jr in a rematch after a Written order from the IBF stating the winner will award him his mandatory shot.

Joshua, won the rematch with Ruis Jr with a 12 round unanimous decision, winning titles he lost via a 7th round stoppage back in June 1st in NewYork. The Brit was to face Pulev on July 20th before the Corona Virus pandemic changed everything thing and forced it’s postponement but that just couldn’t change anything written in paper.

“That clause was covered very well,” Ivaylo Gotzev, CEO of Epic Sports—Pulev’s co-promoter along with Top Rank—confirmed to BoxingScene.com. “There’s no way out, even though Joshua keeps looking for new ways to avoid us. We have exercised our right to fight for the title we’ve been waiting for years.
“We understand that a fight with Fury and Joshua is big for the United Kingdom. The last we checked, we do not all live under a newly established British Empire. Let’s just all do the right thing and move forward with the fights we have in writing. After Anthony Joshua loses to Kubrat, he can go fight whoever he wants.”