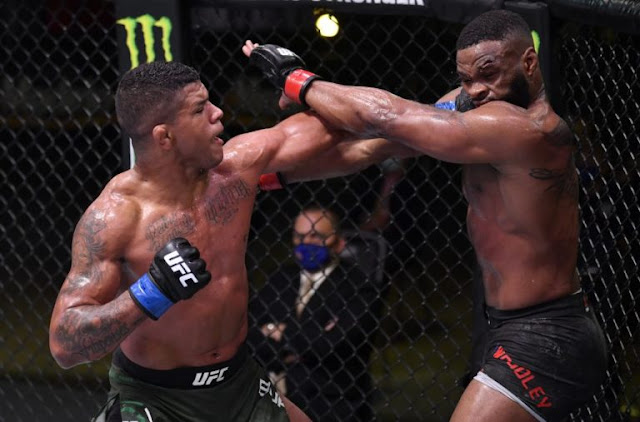 Gilbert Burns has now established himself as a top contender in the UFC welterweight division by dominating former champ Tyron Woodley throughout the UFC on ESPN 9 main event to win a unanimous decision on Saturday night at the Apex Center in Las Vegas. Live on ESPN/ESPN+.

Tyron Woodley was ones a very dominant force in the UFC welterweight division Burns was ready for everything, he could bring, dominating him from the opening bell, cut him open early in the fight and controlled the fight both on feet and on the canvas to earn a unanimous decision 50 – 44 twice and 50-45 on the Judge’s scorecards.

Burns didn’t joke about his intent after defeating the former champion. He called out Welterweight champion Kamaru Usman in his post fight Interview.

Gilbert Burns was able to hurt Woodley in the opening round of the fight Wobbling him with some Hammer Fists and sent him to the canvad. He followed him up and staged a full mount, then hammered him with his heavy hands and when Woodley was able to surface, his face was already cut.


Woodley did his best defensively, while his back was on the canvas and was able to get himself back on his feet with two minutes remaining in the round. However, the two tried making use of their striking with Gilbert Burns working out a pair of kicks before woodley, whose kick got circled away and used to create an opening.

Burns drilled Woodley with a Bodykick followed by a pair of left hooks before the round ended but his pressure was constant till the end of the fight. In the fifth round, Burns didn’t back down from the challenge of having Woodley still a surprise finish in a fight he had dominated from the opening round.
He went out guns blazing, trikes his best and forced Woodley to the fence, where they both exchanged strikes at close quaters. However, in the middle of the round both got separated and ones allowed to fight, Burns connected a big one on Woodley’s face. Woodley’s strike had a partial contact but didn’t do enough to stop Burns pressuring him till the end of the round.