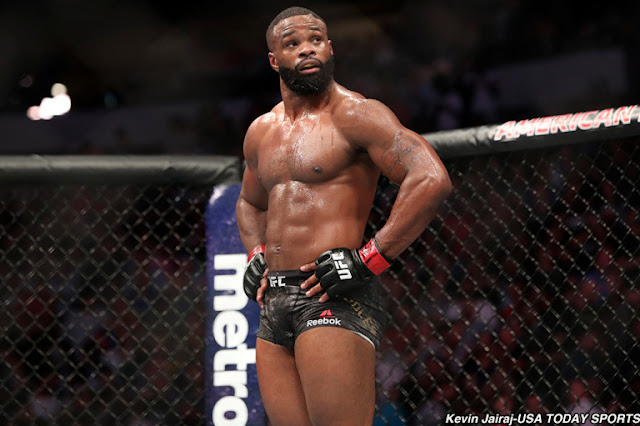 Woodley was dominated from start to finish in a fight that was supposed to be his bounce back from his title loss to Kamaru Usman about 15 months ago. The first back to back loss in his professional career but this seemed to bother him less as he felt and look d alot calmer in his post fight interview.

“I felt good,” Woodley said. “I have no excuses. I felt good. I train hard. I was in great shape. I felt like I did everything right. Everything felt good from the walkout to the stretch, to every single thing about the fight. I looked him in the eyes yesterday and knew he was going to be ready to fight. I thought that was good. He did a good job of keeping the distance (and) not coming at the shots. I felt like I was reaching. I don’t have no excuses, man. I’m going to hold my head high.”

Woodley seems to be going through a face and that seemingly affected his fight with Burns and while making the post fight Interview, he referenced almost giving up in the fight but said the issues presently going on as a result of the Death of George Floyd, served as a motivation.

“A lot of (expletives) would let somebody finish them off in that moment,” Woodley said. “I wasn’t going to (expletive) give up. I was just thinking about everybody right now who’s protesting and fighting for something good for Mr. Floyd’s family I’m like, ‘I just can’t give up in here.’ I never really gave up hope that I was going to win the fight, to be honest.”

Woodley presently doesn’t believe he lost the fight and despite having many excuses and fingers to point, he will just take it as another loss and cleared the media, his faith is in God.

“I just wanted to come and face you guys because I don’t understand,” Woodley said. “It doesn’t make a lot of sense to me. It’s not very clear. I just know I’ve got to trust God. I’ve got a weird peace for somebody who just got their ass whooped. I don’t know why I am at peace – not with losing, not with defeating, not with losing to Gilbert.

The fight between Tyron Woodley and Gilbert Burns served as the headlining bout of UFC On ESPN 9 on Saturday night at the Apex Center in Vegas.
Burns on the other hand has already set the pace for his career, calling out the UFC welterweight champion and friend Kamaru Usman after the win.
Tyron Woodley vs. Gilbert Burns