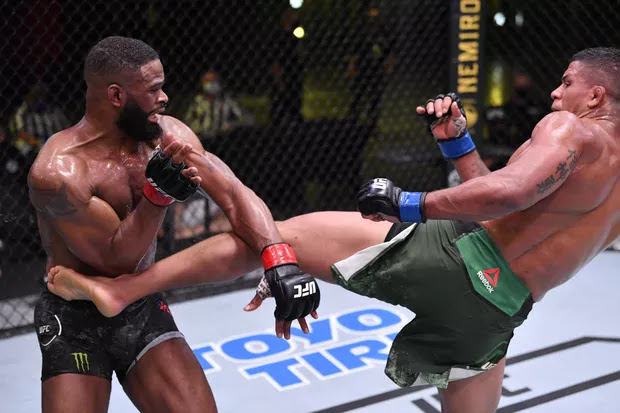 Woodley went into the fight after almost more than a year away from the Octagon and his return wasn’t as palatable as he perceived, with Gilbert Burns pressuring and dominating him from the opening round till the end to win a unanimous decision 50-44 twice and 55-45 on the Judges scorecards.

“I’m very happy. I trained so hard for this fight. I knew I could do it. I was calling this guy out for a reason,” Burns told Daniel Cormier in his post-fight interview. “My name now has got to be the No. 1 contender. I love the champ, my training partner Kamaru Usman, but c’mon – give me the shot. I’ve got a lot of love for you, but I’m next. I want to fight for the title. If they want to make the fight in July, I’m injury free. I want to fight for the title.”

Gilbert Burns set the pace early in the opening round when he wobbled Woodley with a big strike after both engaged in close quarter exchanges then sent him to the canvas, where he mounted up and pounded away the former champion with punches and elbows. When Woodley was finally able to surface again, a cut was open on his left eye lid.

Woodley survived the onslaught, but Burns had only begun, his confidence had risen and  with that sent Woodley a pair of kicks but that was easily dealt with Woodley tried his, which got blocked and circled away for an opening, which ended with a body kick an a left hook before the round was out.

Burns made clear, he was out to avoid Woodley’s power, making use of every opportunity to land a strike and accompanied that with some good speed and power. He varied his striking with astonishing combinations which also included blistering kicks.

Woodley kick started the second round with a combination that sent Burns off balance but then the pace slowed afterwards with both trading in close quarters till Burns sent Woodley to the canvas again and landed knees to the body while Woodley tried to get himself up. They traded positions and exchanges till the end of the round, which was also given to the Brazilian.

Both fighters became a little too cautious in the third round but Burns remained the aggressor, forcing Woodley to the walls of the cage, where they both exchanged strikes with Burns prevailing with low kicks that left Woodley uncomfortable each time it connected.

It was clear in the fourth round, Woodley needed a stoppage to win the fight but Burns was still the aggressor. Woodley began with a big right hook but that was perfectly ducked by Burns, who went in for a take down. However, that wasn’t successful as both went back to the clinch and stayed glued till the referee had seen enough and had to separate them. Late in the round, Burns went in with a barrage of unanswerable strikes that s my Woodley to the Canvas ones again. Burns pushed for the finish but Woodley applied some good veteran experience in there, escaping again to his feet.

Burns gave Woodley no time and space to get the finish, which was the only available option for the former champ. Burns fired out Pushed Woodley to the fence and both had to clinch, connecting strikes whole held up till the referee had to come in again after witnessing little action. But ones the restart was on, Burns landed a big right on Woodley. Burns got Woodley’s shot blocked and had him contend with him being the aggressor till the end of the fight. 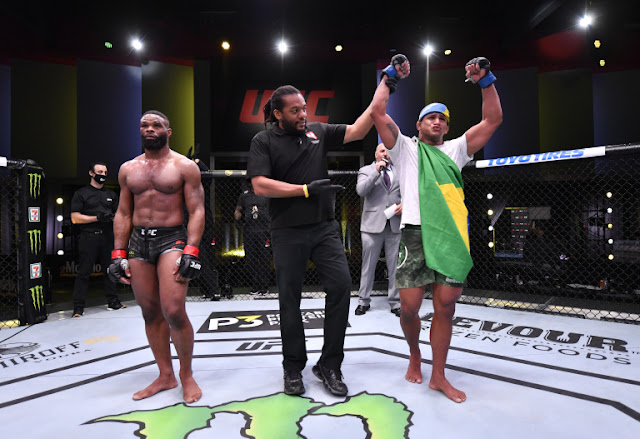 Burns successfully defeated one of the best welterweights in UFC history and after the fight felt so happy with his performance, he only wants to fight for the title and so called out the only person with one in the UFC “Kamaru Usman“.

“I love the champ, my training partner Kamaru Usman but give me a shot,” Burns said afterwards. “Dana White, Hunter [Campbell], Sean Shelby, Kamaru, I want to fight for the title.

“A lot of love, a lot of respect for you but I think I’m next. I’m right there. I can fight in July. I want to fight for the title.”