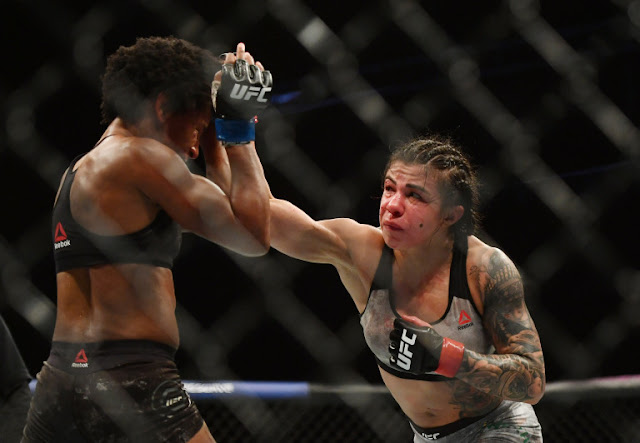 Strawweight Contender Claudia Gadelha was able to take a unanimous decision away from her Strawweight battle with Angela Hill in the UFC On ESPN 8 Co main event on Saturday night at the VyStar Veterans Memorial Arena Jacksonville Florida.

Gadelha was able to overcome a serious knockdown and used more of her ground work and punching power to get the favour on the Judges scorecards with two of them giving 29-28 score to Gadelha. Hill protested the score and reacted to the decision.

Gadelha showed off her well improved boxing ability in the opening minutes of the fight before switching to here favorite ground work and ones she was able to put Hill on the cancas, she controlled the fight from then, gradually breaking down her opponents defence.

Hill came back for the second round determined to stay on her feet and to that effect connected more strikes from the distance to keep his opponent away, which includes a blist ring right hand that ended up dropping Gadelha to the canvas but couldn’t capitalise on the drop.

The two fighters earned one round each from the first two rounds of the Grueling Battle, they switched up their game with the intent of winning the final round . Hill was however the fresher fighter of the two forcing charging out with hard punches and good movement while Gadelha found it a little difficult in her movement.

Gadelha had her punches coupled with a lot of power as she dished out clubbing punches and in turn hill connected Jabs and Hooks till the time ran out, leaving the judge’s with a tough decision to make. 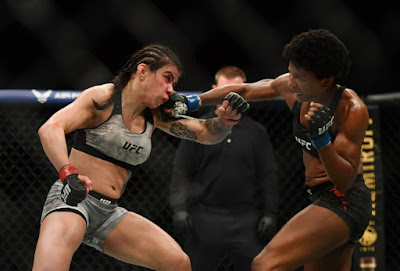 The decision was eventually given to Gadelha, who with the split decision turned her attention to another split decision she will like to rematch .. called out Carla Esparza.

“Hey Carla Esparza,” Gadelha shouted when calling out the former strawweight champion. “Let’s do it again.”