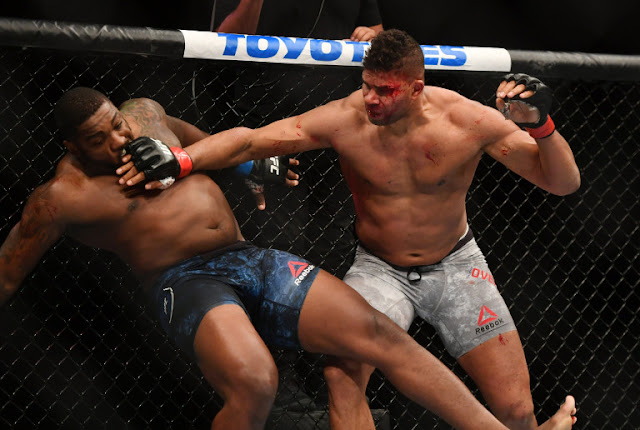 Heavyweight contender Alistair Overeem was really the center of attraction as Walt Harris received such an emotional welcome back to the cage following the death of his Daughter but was able to do everything necessary to take home a win in the UFC on ESPN 8 headliner on Saturday night at VyStar Veterans Memorial Arena in Jacksonville Florida, broadcasted Live on ESPN.

Overeem (46-18 MMA, 11-7 UFC) was part of those fighters , who showed care when Harris went through those trying times but kept to his word to stick to business when they eventually met in Saturday night. Overeem was able to overcome the early charge from Harris, scored a highlight reel TKO victory at exactly 3:00 of the second round.

UFC On ESPN 8 FULL Card Results
The victory was Overeem’s 65th fight as a professional and the win wasn’t an easy one as he dug deep, connected the nessesary strikes in a back and forth battle that saw both fighters hit the canvas but his drop was the best as he was able to seal the victory.
GET UPDATES ON YOUR FAVOURITE SPORTS

The opening round, started out out with a huge charge fro. Harris, who came out swinging Hard blows. Overeem tried using his footwork to evade the charge but that wasn’t possible as Harris had tagged him so much to force a drop. Harris followed up those shots with a couple of submission attempts but failed as Overeem miraculously escaped and got back to his feet.

An over-hand from Overeem sent Harris crashing later in the round and a follow up from Overeem saw him spend the remainder of the round tagging away a fatigued Harris. After the ground and pound from Overeem, Harris Walked back to his corner struggling for breath but was far refreshed after the one minute break.

The second round was lit as both fighters came out firing in a back and forth round before Overeem, sneaked a vicious overhead kick on Harris that sent him ones again to the canvas. That spelled the end as Overeem connected on him continuously from the top position till the referee stepped in to stop the fight.

After the fight, Overeem was happy with his performance and also expressed his hope to step in the Octagon ones again before the year runs out.

“Somehow I keep finding the focus, I love it,” Overeem said in his post-fight interview with Paul Felder. “Let’s look at the rankings, fight again later this year and maybe see if there’s one more shot at the title.”

Harris on the other hand, was much more emotional , thanking fans, Friends and family, vows to comeback stronger

“I want to say thank you first and foremost to he UFC,” Harris said. “They’ve been amazing through the whole process. My wife and my family is so grateful. We owe you guys everything … I’m so grateful to you guys.”