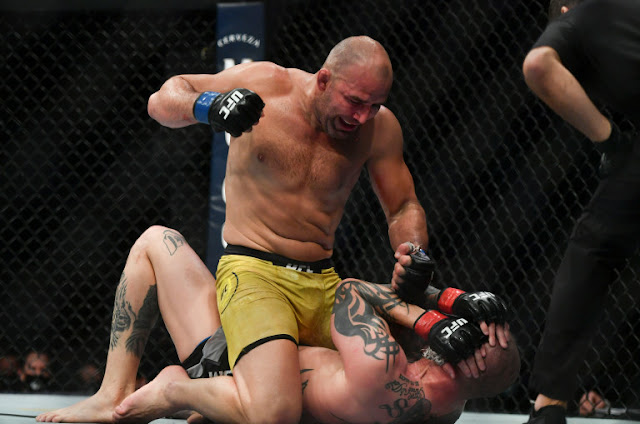 Another big Upset hits the UFC and this time veteran Glover Teixeira pounded Top Light heavyweight contender Anthony Smith away to a fifth round TKO victory in the Main event of UFC On ESPN+ 29 on Wednesday night at VyStar Veterans Memorial Arena in Jacksonville, Florida.

Teixeira made a statement with the win after six years gone by since his last title shot, he finds himself back as a top contender at Light Heavyweight with a masterful performance.

Smith with strength and age in his side, looked to use that advantage early, fired five front kicks following them all with some sharp combos.

“It’s not how hard you hit, it’s how hard you get hit and keep coming forward,” Teixeira said in his post-fight interview.

The dominance was transfered to the s find round atleast until his right strike left a swelling on Teixeira’s eye and that was where everything changed and the Connecticut fighter fighting out of Brazil, picked up pace, connecting more and made visibly slow as the round got spent.

The fight was over by the end of the Fourth but the referee didn’t wave it off and his corner ignored complaints from Smith after he claimed his teeth were falling off and sent him again but the fight didn’t last longer than a minute before the referee waves off the fight .

The victory marks Teixeira’s 26th stoppage victory and Smith is presently 1-2 in his last three fights.