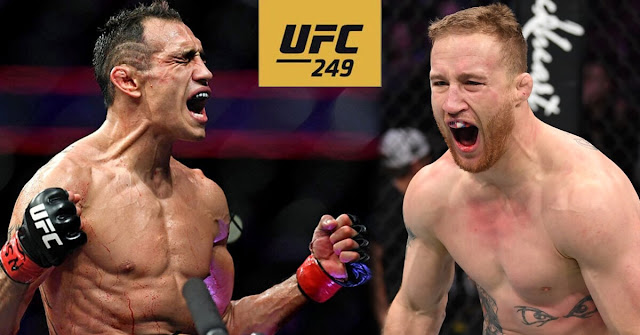 UFC Interim Champion Tony Ferguson doesn’t see himself a former interim champion or a see himself fighting to reclaim the Interim lightweight champion but a champion defending his belt.

Ferguson will be facing Justin Gaethje at UFC 249 main event and maintains that the winner of the fight will determine the he best in the division.  This is because the UFC lightweight champion Khabib Nurmagomedov got held back by Russian Travel Bans and eventually stopped him from carrying out his duties as a champion.

The UFC 249 main event fight between Ferguson and Gaethje is for the Interim Lightweight title, a title Ferguson held in the past after submitting Kevin Lee at UFC 216 to claim the belt. Ferguson was eventually stripped of the title after pulling out of a fight with Nurmagomedov

Ferguson has always been open about his opinion of Khabib Nurmagomedov and didn’t waste time unloading his frustration after the whole UFC 249 issues caused by the pandemic unfolded in April 18th, which indirectly opened the door to Justin Gaethje and further  helped him justify his stance of being the best in the division.

The natural order of things will leave shaky Ferguson’s stand as he will have to first defeat Justin Gaethje before unifying with Khabib Nurmagomedov, to be the UFC Lightweight No.1. However, Gaethje has a much better opinion or mindset ahead of the fight.

“The interim belt means for me that you’ll be recognized as the No. 2 man in the world,” Gaethje said. “Khabib can’t fight right now, so these are the two baddest man in the weight class fighting this weekend for the right to call themselves the best then ultimately challenge Khabib. I think we’re fighting for the opportunity to represent America against Khabib. That’s what I’m fighting for.”

UFC 249 will take place at the VyStar Veterans Memorial Arena in Jacksonville, Florida and will be Live on Pay-per-view with prelims to air on ESPN and ESPN+