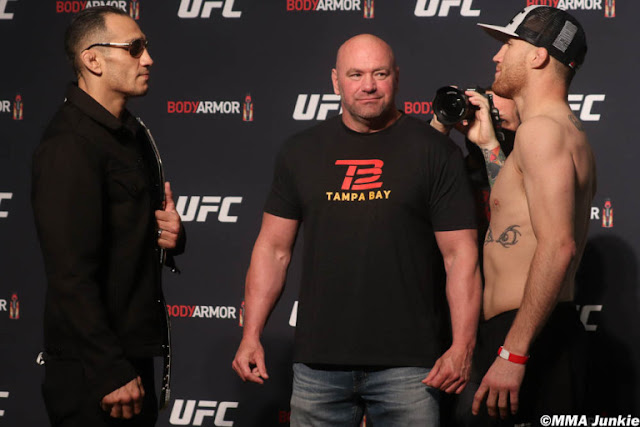 ↑ Grab this Headline Animator
The Ultimate Fighting Championship (UFC) has finally made breakthrough after scaling through numerous huddles in their attempt to stage UFC 249 during the Corona Virus pandemic and will MMA, the first to return since everything got to a stand still in the world of Sports.

Live from VyStar Veterans Memorial Arena in Jacksonville, UFC 249 will hit your screens with the Main Card airing live on Pay-per-view following prelims on ESPN and ESPN+ and with Dopeclics, you won’t have to miss a thing. We bring you Live Results, Video Highlights and Images.

The event is headlined by an action promising fight between Tony Ferguson and Justin Gaethje with the UFC interim lightweight title at stake. The victor gets a one way ticket for a unification fight with the lightweight champion Khabib Nurmagomedov later this year.
Bantamweight champion Henry Cejudo will defend his title against Dominick Cruz,  another action promising fight though the crack at the title was really worthy but due to the unavailability of most fighters became the best the promotion could bring together.