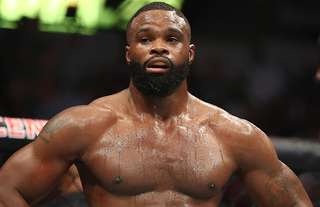 Former Welterweight Champion Tyron Woodley might be having his big day coming faster than you might expect and according to UFC President Dana White, they are close to finalising a deal for the 23rd of May.

The UFC revealed this information during his interview with the promotion’s broadcast partner’s ESPN on Friday.

“We’re working on a fight with (Woodley) right now,” White said. “After these three dates, we’re coming right back. We’re going to do four fights in 14 days. After May 9, the UFC schedule is back on. We’re back on and running. We’re looking at a fight for Woodley. Woodley will probably be the fourth fight. He’ll be the main event.”

Woodley will be making his first return to the octagon since losing his Welterweight title to the present champion Kamaru Usman at UFC 235 back in March 2019.

Before the Corona Virus pandemic put a hold on all Sporting activities, Tyron Woodley was preparing to face Leon Edwards on March 21st in UFC on ESPN+ 29 Main Event in London. However, the fight got cancelled during the fight week after Edwards pulled out of the fight.

Tyron Woodley’s return on May 23rd hasn’t been finalised and no venue, streaming information has been made public. more information about his return will be announced soon.

ESPN made an announcement, after the interview with White that Tyron Woodley is close to signing a contract for a potential fight with fellow Welterweight contender Gilbert Burns, who was also linked to the March 21st date as a late replacement.