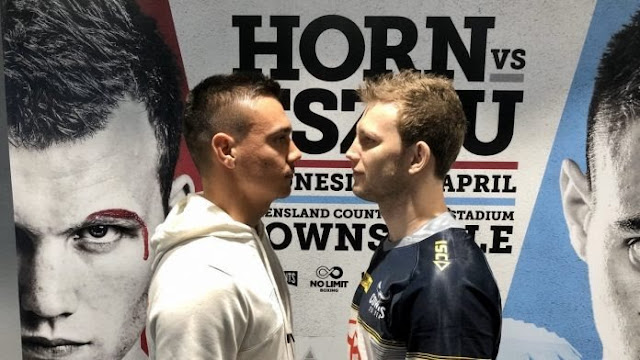 Matt Rose, Promoter of Australian prospect Tim Tszyu is presently anxious of going back to negotiations for the fight against former WBO welterweight titlist Jeff Horn.

The fight was initially tentative for last month at Townsville but things got sour after the Corona Virus outbreak, ending with the postponement of the bout. However, the promoter got impressive by the UFC’s ability to stage fights during the pandemic and views that idea as a good one for the fight.

“I enjoyed the [UFC] fights. I didn’t think I would and thought it would be hard to watch without crowds. I worried that the fighters themselves might struggle to get into it. But I think they showed that with the best match-ups and good fights, it doesn’t matter whether the crowd is there or not,” Rose said to WA Today.
“That’s what made me think about Jeff and Tim. In that case, we’ve got a really good contest, we feel we can win that and they feel the same thing. I honestly think there is a real opportunity for us to come back to the table as soon as possible and start to negotiate something around fighting without a crowd.
“We want to stick to the plan and fight Jeff but, if he isn’t willing, we’ll look at other avenues because we really want to get back in the ring, knowing now there is an opportunity to do that. You never say never with boxing but our plan is to take out Jeff Horn and move on to a world title. For us, the sooner we fight Jeff the better. I want to come straight back to the table for negotiations. That’s why I want to push ahead and get it done whether there is a crowd or not.”

Lonergan however, analysed the different ways everything could play out but admitted, it all boils down to the two fighters and what they are capable of doing in the ring when they eventually meet.

Lonergan also believes that fighting in front of a huge crowd will be impossible this year and that fighting without crowds will also take setting up measures and having an agreement between between all parties involved. This will also include the Queensland government.

“I’m totally relaxed about what format we run this fight in and I think Matt is the same. The two key decision makers in this are Jeff and Tim,” Lonergan said to WA Today.
“The Townsville fight with 20,000 people is the equivalent of an Origin in league. The boys are very keen to fight in front of a big crowd. But the reality is, that may or may not happen this year. If you can’t fight in front of a big crowd, maybe there’s a reduced crowd. As restrictions loosen, there might be discussions between all of the parties, including the Queensland government, to see what happens.
“As fight sports start up, the guys will start getting itchy. For us not to do that, to do something a bit different, would take discussions between all parties. The longer this drags out, the more likelihood that would have of happening.”

The fight between the two will be the biggest fight to make in Australia at the moment and with both wanting the fight, the pandemic presents the only obstacle for the fight to happen. However, adopting the UFC’s type of arrangement could eventually bring back Boxing which has been since been on hold since the pandemic came in.