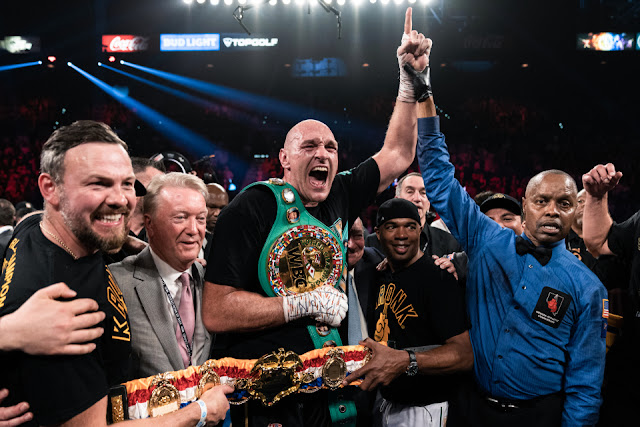 Boxing legend Naseem Hamed believes that Anthony Joshua will be an easier opponent for WBC heavyweight champion Tyson Fury to beat than Wilder, whom he dropped twice en route to a seventh round stoppage win in February.

The win over Wilder, earned Fury the WBC heavyweight title at the MGM Grand Arena in Las Vegas.

Joshua holds the IBF , IBO, WBA and WBO heavyweight titles, which he reclaimed with a unanimous decision victory in the rematch with Andy Ruiz Jr in Diriyah, Saudi Arabia. At the moment, the fight between Anthony Joshua and Tyson Fury is presently the biggest fight to make at the moment.

Updates
On Your Favorites Sports

Both boxers are already tied to a contractual agreement which they will have to fulfill before the possibility of a mega fight between the two British champions. Tyson Fury will have to face Deontay Wilder a third time and Anthony Joshua will have to take care of IBF Mandatory challenger Kubrat Pulev.

However, Hamed believes that Tyson Fury will be too fast for Joshua, than Deontay Wilder because his style fits him more.

“What he [Fury] has done has been phenomenal,” Hamed said on the Heavyweight Podcast.
“I am looking forward to Tyson vs Joshua and I do believe that Tyson is too fast and too slick. I think that’s maybe an easier fight than the Wilder one – and the Wilder one was very easy.”

Frank Warren, who co promotes Tyson Fury has in a recent interview addressed the assertion that there has been talks concerning a potential unification fight between the British Champions. He maintained that no offer has been made from any of the parties concerning the potential meeting.

“We haven’t spoken to them. You’ve got to deal with the facts and Tyson has a contractual agreement with Deontay Wilder, and Pulev has signed on to fight AJ. There’s been all these stories about negotiations going on, but there hasn’t been any because there’s nothing to negotiate. No offers have been made from either camp,” Warren told Talk Sport.
“All the parties concerned have signed an NDA (non-disclosure agreement) with one of the countries – but we can’t talk about that. There’s no offer forthcoming from them, nor indeed from any other people that we’ve spoken to thus far. Until you actually know what the offer is, how can you negotiate?”