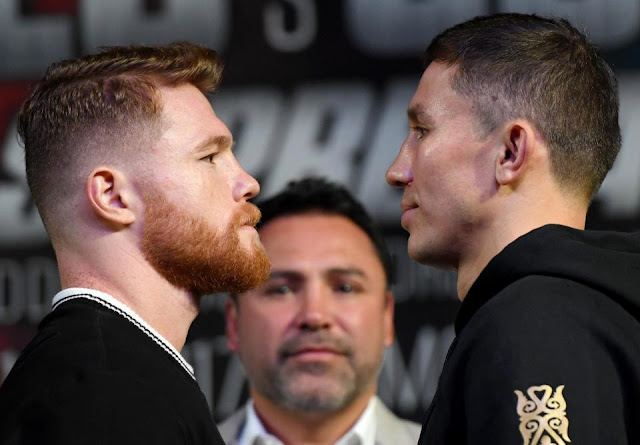 Golden Boy Promotions CEO Oscar De La Hoya says that Canelo and his team are totally dedicated to finalising a deal for the anticipated trilogy fight between with Gennadiy (GGG) Golovkin.

The third fight between Canelo Alvarez and GGG is expected to take place on September 12th but may still be changed due to the Corona Virus Pandemic.

It has also been on the news that Gennady Golovkin was looking to make a mandatory defence of his IBF strap before stepping into the ring with Canelo.

DAZN presently has the exclusive signature of both fighters and will love the fight staged immediately after the Corona Virus pandemic to aid them regain their losses incurred during the period.

“We have to make a statement and GGG-Canelo has to happen,” De La Hoya told CBS Sports’ “State of Combat” podcast. “We have to show the world that we can make the big fights happen and that we are here to say. Boxing will always be boxing and will always survive, pandemic or not. Boxing has been around for ages. It’s as long as we make the biggest and best fights. Canelo and GGG doesn’t get any bigger than that.”

Canelo Alvarez and Gennady Golovkin both fought to a controversial split draw back in 2017 while the Mexican emerged with a majority decision a year later, snatching away middleweight titles from the Kazakhstani knockout artist.

Before the Pandemic, Canelo had plans to fight WBO super middleweight champion Billy Joe Saunders this weekend but the date also got affected by the Corona Virus pandemic. Canelo seems to have bigger plans than facing the British Champion at the moment.