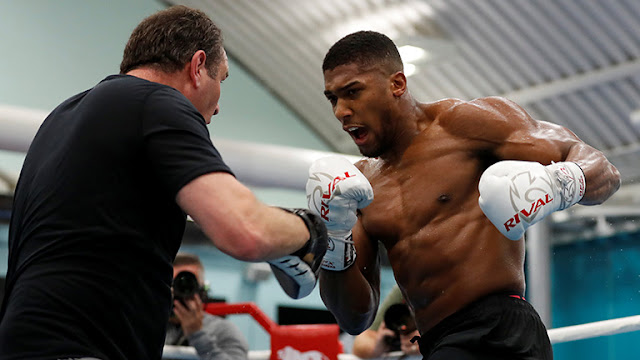 IBF, IBO , WBA and WBO heavyweight champion Anthony Joshua is ready to begin preparation for his ring return in The Essex Fight Camp Series which is scheduled to take place on July according to his Promoter Eddie Hearn.

Hearn recently revealed to the DailyMail, his plans to host boxing shows behind closed doors on four consecutive Saturday in their 15 acre ground located at MatchRoom Headquarters in Brentwood, Essex.

According to Hearn, Joshua will be willing to participate in one of those for days but that will no longer be possible due to the on going Corona Virus pandemic.

Boxing has been in hold since the Corona Virus outbreak in mid March, forced many countries into a total lockdown and indirectly lead to the cancelation of all MatchRoom Events between the period of match and June.

There has been steady communication between the MatchRoom Boss and those under his stable, with many showing willingness to return to training.

“Ninety percent of fighters are ready to go,” Hearn told IFL TV.
“They want to carry on their career. I was talking AJ, AJ wants to fight here at Fight Camp. I don’t think that’s necessarily an option. But he wants to fight. This is what he does, I want to go back to the office, I want to go back to work. That’s what I do.
“I’m sure fighters would prefer to fight in front of live crowds, of course you would. That’s not going to be an option in the interim and may not even be an option until next year. So, be a pro, get prepared and get a fight in the bank. Get your money in the bank, progress your career and let’s go.”