Anthony Joshua Overlooking Kubrat Pulev, He Ain’t On My Level 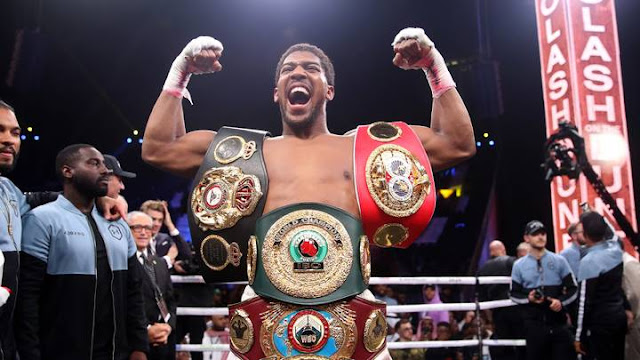 Unified Heavyweight Champion Anthony Joshua has promised to make little work out of his mandatory challenger Kubrat Pulev when they eventually meet as he sees hself levels above the Bulgarian.

It is however, inadvisable to underestimate your opponent especially Joshua, who was put through an upset by Mexican heavyweight Andy Ruiz Jr in his his American debut back in June last year. The Brit who won his titles back with a unanimous decision in December is looking past Pulev and believes he is supposed to in order to focus on the bigger picture in a recent appearance on Chris Mannix’s Sports Illustrated boxing podcast.

“It’s in a way overlooking Pulev, but I’ve gotta look through Pulev because I’m gonna walk through Pulev,” Joshua said in reference to his IBF mandatory challenger and upcoming opponent. “That’s the mindset. I’ve gotta walk through him. When it comes to Pulev, he ain’t on my level. I want the boys at the top. I ain’t worried about the boys, you know, around me. I’m walking through them all, and that’s the mindset that we have to have as fighters. So, I’m looking at Tyson Fury like I’m gonna walk through him as well, because I had my issue last year, I got through it and I wanna correct it.

“And I told you like people don’t know what that does for a fighter mentally, when he loses in front of the world, and what it takes to come back. And, you know, having this time to reflect has been a blessing in disguise. It’s been a blessing in disguise, so we’ll see what the future holds and when Fury and Wilder’s ready, I’ll tell you this, I will not turn down that offer.”

Joshua , who fights out of England was to make the mandatory defence of his IBF strap against Pulev at the Tottenham Hotspur Stadium on June 20th in London before the Corona Virus Pandemic took over and soiled the preparation, prompting an indefinite postponement.

Pulev has only been defeated ones and that is against former heavyweight ruler Wladimir Klitschko, who knocked him out in the fifth round of their championship fight in Germany back in 2014. However, Joshua was the last to defeat Klitschko, sending him into retirement back in 2017.

While the British Fans will love to see the two Giants clash in what will be their biggest British Boxing fight in their history, Tyson Fury will have to defeat Deontay Wilder the second time in their third meeting and Joshua will have to defeat Pulev to make Joshua – Pulev happen.

“The only reason is because of that Ruiz fight,” Joshua said regarding why he is listed as an underdog against Fury. “That’s the only reason, and that’s why I’m ready to redeem and put trust back into my stable. I get it. I get it, you know. After I went through what I went through, and made no excuse, it must’ve seemed that Ruiz beat the better man that night. You know, so I didn’t make no excuse, so Ruiz must’ve believed that, ‘Yeah, that night I beat the best Anthony Joshua.’

“And that’s cool to think that, but I’m working. It’s such a shame that I’m in quarantine right now because it’s put a halt to greatness. But this is part of history. But I’m working toward beating Tyson Fury. Whether the bookmakers or [non-believers] or the doubters wanna be with me or not, I have to believe it. I’m working towards beating, you know, Tyson Fury.”