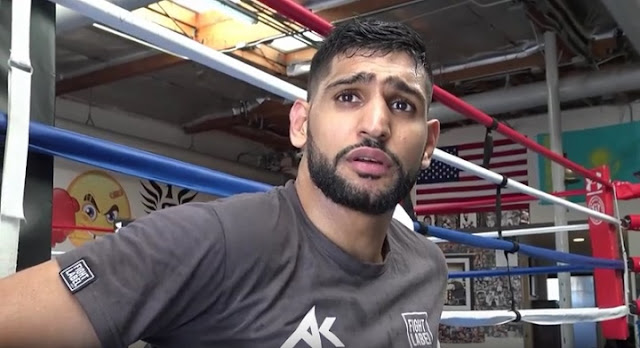 The fight which remains the biggest fight possible for the Brit but seems blur as the eight division champion from Philippines hasn’t really looked Khan’s direction despite his recent call outs.

Manny Pacquiao was last seen in the ring in July 2019, when he dropped former champion Keith Thurman en route to a tough unanimous decision win, earning him the WBA welterweight title.

Both fighters had back in 2017, tried to get themselves a fight which was likely to be staged he Middle East. However, the fight never came to fruition as those making the investment on the fight failed to provide proofs of  money for the fighters.

“It’s hard to say. Sometimes you wait around too long for fights like Manny. Like Mayweather you waste so much time trying to get him to sign the piece paper that guarantees the fight is happening – you waste time,” Khan told Sky Sports.
“I’ve almost had 40 fights now. I am going to take my time and see what options are out there. If the Pacquiao option is there it would be great to get back in the gym to work towards that. What’s left out there? The big fight with Mayweather or Pacquiao? Who knows, that’s up to them to sign.”

There is still an available option for Khan and that remains the grudge fight with his domestic rival Kell Brook. Khan says that Brook walked away from the negotiations for the fight because he only wanted to fight him at 147 pounds.

“What happened? When me and [promoter Eddie Hearn] were in talks we were talking about it at 147-pounds. Then as the talks were going on it went quiet,” Khan explained.
“Then we hear that he’s gone up to 154-pounds. He knows I would never go up a weight. I went up [two divisions] against Canelo. I said ‘if I am going to fight it would happen at 147’. It was him who walked away from the fight. He’s a respectable fighter. He’s a good fighter. It would be massive in the UK. 147-pounds is the weight, really. I’m not going up or down.”