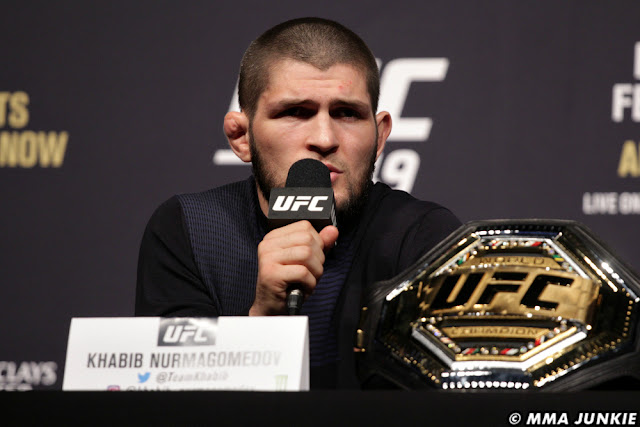 UFC Lightweight Champion Khabib Nurmagomedov confirmed on Wednesday, that his fight with Tony Ferguson is finally off, which marks the fifth time both fighters have been booked and called off due to reasons beyond the UFC’s power.

The fight was supposed to be the headlining bout of UFC 249, which was initially scheduled to take place on the 18th of April. However, Khabib posted yesterday on his Instagram handle, that the fight against with Ferguson is off because of the lockdown in Russia.

“Staying home in quarantine and reading the reaction of people to the situation around my fight, it turns out that the whole world should be in quarantine,” Nurmagomedov wrote.
“Governments of all countries, famous people around the world urge people to follow all safety requirements in order to limit the spread of the disease, to save people, and (I am) the only one relieved of all obligations and must demonstrate free will and train flying around the world, for the sake of fight? I understand everything, and I’m definitely upset more than you to cancel the fight, probably like all others, I had many plans after the fight, but I can’t control it all.”

Khabib’s post didn’t come as a surprise to anyone, as the UFC had been trying their best to make the fight happen despite everything in the world of sports standing still due to the Corona Virus Pandemic.

Travel restrictions held Khabib down in Russia as the Russian government implemented this to help reduce the spread of the Virus in the country.

The UFC 249 event was to take place at the Barclays Centre in Brooklyn but due to the current Pandemic, which had forced the country into some form of lockdown and the closure of many Businesses. However, the UFC are now planning to take the fight card else where as the event canvas be stage anywhere in the US.

However, is seems very unlikely that the fight will go on as planned after Khabib Nurmagomedov announced the fight with Tony Ferguson was off. However Dana White maintains the show must go on and to that effect, many fighters have decided to step in on short notice but non has really been finalised.