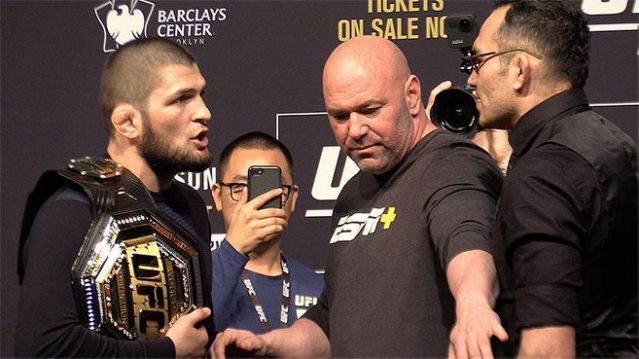 Speaking in “Ask Me Anything” on Reddit, replied a question which required a firm response on the state of things  on the match up between Khabib Nurmagomedov and Tony Ferguson and if the fight could be made before the year runs out.

“How confident are you that Khabib and Tony will fight at some point this year?” White was asked by a commenter.

Tony Ferguson is presently preparing to fight Justin Gaethje at UFC 249 Main Event,s which is scheduled for May 9th. the former WSOF champion Gaethje, is stepping in for Nurmagomedov, who pulled out of the event due to Russian Travel restrictions caused by the Corona Virus pandemic.

The fight between the No.1 ranked and No.2 ranked lightweight fighters Nurmagomedov and Ferguson has been booked five times in the past and has been cancelled each of those five times. The two first got paired back at Ultimate Fighter 22 Finale in December 2015 but Khabib pulled out due to a rib injury. The next pairing was in 2016, when they got paired at UFC on Fox 19 but then Ferguson pulled out due to an injury.

The two fighters got paired again at UFC 207 but the fight got cancelled after Khabib Nurmagomedov got hospitalised due to weight cut issues , while the fourth time, Ferguson pulled out due to a knee ligament injury.