Ryan Garcia Could Beat Anyone but Needs More Experience – Reynoso 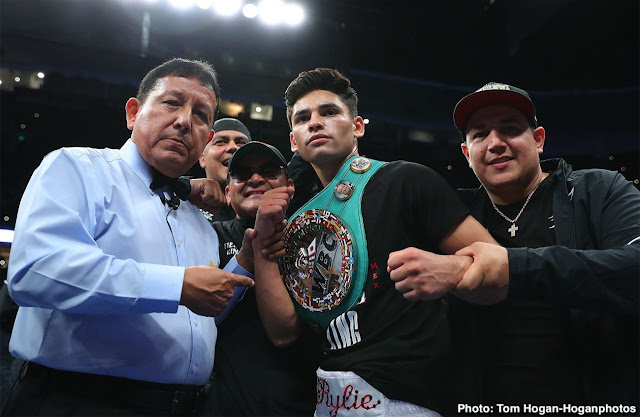 Lightweight prospect Ryan Garcia has been all over media calling out every champion in the weight division and has been specifically exchanging banters with newly crowned WBA lightweight Champion Gervonta Davis.

The 21 year old Garcia could be a possible treat to champions in the 135 pound division but his trainer Eddy Reynoso, who has been in the Mexican’s corner in his last four fight believes that the youngster still has a long way to being a great champion.

“I would like a couple more fights, in the last three fights we have fought four rounds, he needs to learn more,” Reynoso told ESPN Deportes. “We are missing two or three fights, not because he cannot beat him right now, he can beat anyone, above the ring he can beat a champion, but to get more possibilities, more set in terms of learning and training, he lacks a little more experience and let’s see if this year can be done.
“As far as I am concerned as a coach, we have not beaten anyone; we have not won any world champion, we have not won any world qualifier … But I think we still have a long way to go to become a great champion.”

Reynoso, who was crowned the BWAA of the year, has only coached the Mexican a total of nine round in four fights, which were all stoppage victories for the Garcia (20-0, 17 KOs), since joining him late in 2018.

Garcia is presently riding on back to back first round Knockout wins against Romero Duno in November and Francisco Fonseca in February, before then he, blasted out Jose Lopez in two rounds and finished off Braulio Rodriguez in five rounds.

The Golden Boy Promotions Ryan Garcia is expected to face former four division champion Jorge Linares, when everything goes back to normal after Corona Virus Pandemic issues are over