Dillian Whyte Would Fight Francis Ngannou In the UFC Cage 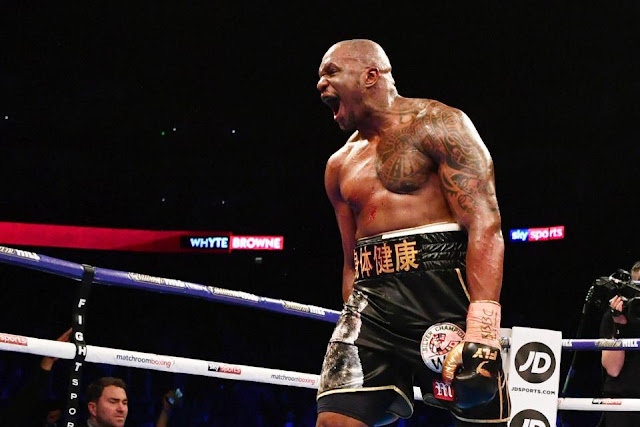 Heavyweight Boxing contender Dillian Whyte believes that, he could easily adapt to taking an MMA challenge as a potential UFC debut looms around the corner.

Whyte was a two time British heavyweight champion, while competing as a professional kickboxer, he also won the BIKMA super heavyweight British title and the European K1 championship, accumulating a 20-1 record.

Whyte was also involved in a professional Mixed Martial Arts bout back in 2008, finishing off Mark Stroud with just 12 seconds into the first round in his fight under the challenge MMA banner.
Dillian Whyte is presently scheduled to fight former world champion Alexander Povetkin but due to the ongoing Corona Virus pandemic, the fight has been pushed from its initial May 2nd date to July 4th and that could still be subject to change.
Subscribe To Live Updates
On Your Favorites Sports

Whyte is however confident, that he has what it takes to take down any UFC heavyweight despite being away from the Sport for such a long period. He believes that defending your whole body at ones makes it impossible to defend against a fighter with such a hand speed as him.

“I have not trained in kickboxing or MMA for a while but, for me, it is like riding a bike,” Whyte told The Sun.

“Once I knock off some of the rust, my instincts come rushing back and I am ready to dominate again. The heavyweight guys over there, champion Stipe Miocic and Francis Ngannou, are elite and I would have to work on my grappling and wrestling. But I know, standing up and boxing in 4oz gloves, I could knock any of their top ten heavyweights out.

“In these cages it is five-minute rounds of non-stop moving, kicking, punching, wrestling — it is no joke. But I have better hand skills than any of them and because they try to cover a lot of aspects, that leaves a lot of holes in their game.”

And while there might be many opponents to choose from when thinking of a potential UFC debut, Whyte will totally love to fight Francis Ngannou, whom he believes has failed to make it in the big stage after finishing his first 10 opponents.

“I have called Ngannou a coward because, for a guy who is 6’4 and 18 stone, he has not shown enough heart in his two defeats. He was on a ten fight win streak, mostly first round wins against journeymen, and as soon as he stepped up he lost twice, when people did not just stand there and let him hit them,” Whyte said.

“Ngannou said he would fancy a boxing match but I notice he didn’t mention my name even after I publicly called him a coward. Says it all really. However, I like the sound of stepping over to the UFC, seeing what sort of deal could be done. Becoming heavyweight champion in both is something no one has ever come close to doing before.”