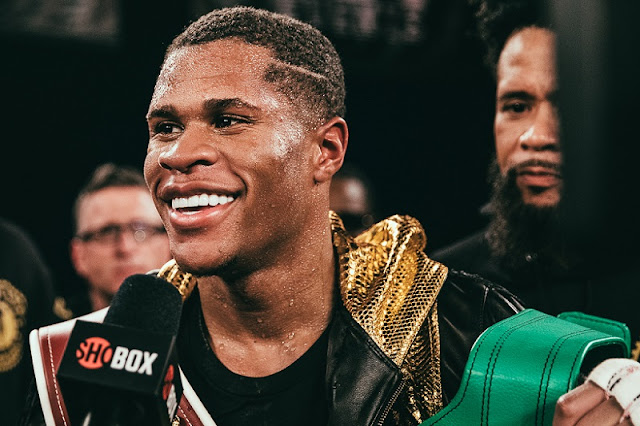 WBC lightweight champion “In Recess” Devin Haney is looking to rekindle his rivalry with Ryan Garcia, who is presently a known figure as a professional.

Having recovered from a shoulder injury and itching to return to the ring in order to continue his title reign as the WBC lightweight champion. He was made a champion in recess after his successful defence of the WBC title against Alfredo Santiago in Los Angeles. Back in November, which ended in him having a surgery on the injure shoulder.
Haney, promoted by Eddie Hearn’s MatchRoom Boxing will be hoping to get another headlining opportunity, when Boxing activities fully resume after the Corona Virus pandemic issues are totally settled.

One of the fights Haney will like to make will be against Garcia, whom he had exchanged a couple of  Feisty words with after Garcia’s first round Knockout of Francisco Fonseca in February.

Having made a couple encounters with Ryan Garcia and his associates, Haney said in an interview with Chris Lloyd in the second episode of the “Lockdown Tapes” that a potential clash with the Mexican is inevitable.

However, there are a few more fights that will interest Haney. These include a fight against former champions Mikey Garcia and Adrien Broner, which will require him moving up in weight, at least one weight upwards roake the fight happen.

“We boxed a lot in the amateurs, so we have a lot of history,” said Haney. Ryan and I have always been advanced for our ages since we were young. He’s always been my rival, it’s always been him and me going at it, I think I was nine in our first fight and he was my second to last amateur fight.
“Ryan’s good and he’s improved in the pros, training with Eddy Reynoso and the Canelo team. He’s getting better with every fight and his talent speaks for itself.
“I have a lot of respect for Bernard and he was just doing his job. When I get a little rowdy with him, I’m just messing because I know what they have set for Ryan and I don’t think they have any intentions of fighting me, at least Golden Boy don’t right now, but Ryan would fight me.
“I want to make the biggest fights happen and if it’s up at 140lbs I’ll gladly go up and take it. A fight with Mikey Garcia, Adrien Broner, those are the big fights there. But Lightweight is where I am campaigning and I’m looking to win more and more world titles.”