Deontay Wilder Felt Like a Zombie In Tyson Fury Loss 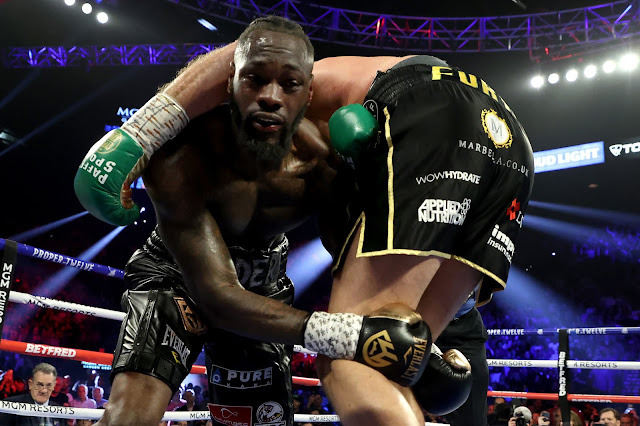 Former heavyweight champion Deontay Wilder believes that anyone watching his rematch with Tyson Fury (30-0-1, 21 KOs) will see, he wasn’t himself from the opening bell till the time of his technical Knockout loss.

Deontay Wilder (42-1-1, 41 KOs) believes that he felt like a “Zombie” from the opening bell and his countenance was what enabled Fury gain so much confidence and directly lead to his dominance, in a fight that saw him drop twice to the canvas before the stoppage.

Wilder, who was handed his first loss in that fight, detailed his condition in the latest edition of “The PBC Podcast” with co-hosts Kenneth Bouhairie and Mike Rosenthal.

“It was something, like I said, I can’t talk about a lot of things, but it wasn’t Deontay Wilder [that] night. You can tell from the mask, my reaction to certain things that I was doing in the ring. You know, you can look from the first fight, into the second fight, and you can tell it was two different people, you know, that night. From a guy that from the first start of the bell was in retreat mode. The first fight, when the first [bell sounded], I was on the hunt. You know, you don’t go backwards. You go forward. And that night I wasn’t myself. I felt like a zombie in there.”

Wilder had given some excuse after his seventh round knockout loss to Fury back in February 22nd. He blamed his 40 pound costume for his bad performance in the rematch and was subjected to a lot of criticism for that because it was viewed by both pundit, professionals and fans as a lame excuse.

The Rematch was nothing like the first as Fury executed perfect dominance, forcing the hard hitting Alabama knockout artist back-foot through out the fight.

Deontay Wilder dropped to the canvas twice in the third and the fifth round respectively before the referee Kenny Bayless stopped the fight after Mark Breland threw in the towel.

“Everything’s gonna be all right, trust me, you know. And I’m just looking forward to coming back in there and doing what I gotta do. I don’t wanna say too much. I don’t wanna feel like I’m making any excuses or anything like that. I just want the people to know that I’m happy, I’m in full health and I’m coming back stronger than ever.”

The trilogy fight between Tyson Fury and Deontay Wilder is presently planned for October 3rd. It was initially scheduled for July 18th at the MGM Grand Arena but got pushed back due to the present Corona Virus crisis affecting the globe.