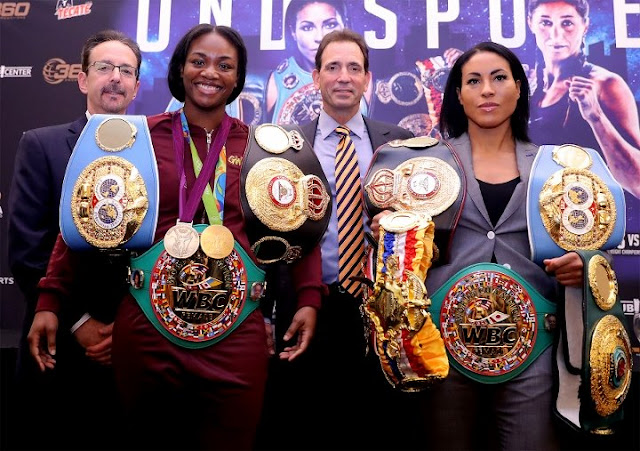 Dmitriy Salita has taken care of  making fights happen for three weight world champion Claressa Shields and could definitely reschedule the unification fight with Marie-Eve Dicaire after the Corona Virus issue dies down but only one fight seems difficult him to make at the moment.

Shields has made clear, she is interested in a fight with Undisputed welterweight champion Cecilia Braekhus, even if it means going down to the 147 pound limit but Salita feels making the fight will be difficult as Braekhus “Definitely Isn’t Interested In The Fight”.

“She’s definitely not interested in the fight,” Salita told BoxingScene.com. “It’s something that we’re not pursuing because her team knows Claressa is ready, willing and able to fight her. And again, Cecilia is a great fighter and she’s very accomplished and this is nothing against her. But in terms of her talking about fighting Claressa, it’s just been for press and talk. There has been nothing serious about that conversation – ever.”

The 39 year old Norwegian, Braekhus (36-0, 9 KOs) was supposed to defend her undisputed status against Chicago’s Jessica McCaskill (8-2, 3 KOs) in the supporting bout of fight card headlined by an anticipated match up between former junior welterweight world champions Regis Prograis (24-1, 20 KOs) and Maurice Hooker (27-1-3, 18 KOs) on the 17th of April at MGM National Harbor in Oxon Hill, Maryland. The show was postponed indefinitely last week due to the Corona Virus pandemic

Shields (10-0, 2 KOs) was also scheduled to make a hometown defence Junior Middleweight unification bout with Dicaire (17-0) at the Dort Federal Credit Union Event Center in Flint, Michigan but that also was postponed but when things get back to normal, Shields will defend her WBO and WBC 154 pound titles with hopes of winning Dicaire’s IBF title.

Salita however, doesn’t believe a fight between the Braekhus and Shields will ever happen even if they both win their respective bouts.

“In our conversations about Braekhus, Claressa said that she would come close to [147],” Salita said. “I don’t know that she could make [147], but she would come close. But with Cecilia, the conversation never became material. She never wanted to take the business conversation to the next level. Claressa has sacrificed herself to make the biggest fights and to continue to make her story. You know, usually fighters go up in weight. Claressa started at 168 and came down to 160, and now has come down to 154.”